Saturday Night Live guest star Alec Baldwin has been married twice in his life. He was first married to actress Kim Basinger from 1993 until 2002 and he later married current wife Hilaria Baldwin a decade later, in 2012. Basinger and Baldwin met while playing lovers in the film The Marrying Man in 1990 and Baldwin previously claimed that Basinger tried to block him from seeing his daughter after they split. With Basinger, Baldwin had one child, a daughter named Ireland Baldwin, who is a fashion model and actress. With current wife Hilaria Baldwin, he has three children – daughter Carmen, and two sons, Rafael and Leonardo.

Last year, Basinger gave an interview with Net-A-Porter and opened up about her divorce from her ex Baldwin, stating:

DIVORCE is hard. My divorce [from Alec Baldwin] was very public and NASTY … There were times I could have chosen [my movies] better. I did this film, The Marrying Man, where I met my eventual [now-ex] husband, Alec Baldwin, but I was teeter-tottering because I had also been offered Sleeping with the Enemy [which eventually starred Julia Roberts]. Isn’t it funny that I turned down Sleeping with the Enemy and then I went on to sleep with the enemy! [Alec and I are] cool now, though. Life goes on.

Just a couple months ago, Baldwin and current wife Hilaria renewed their wedding vows for their fifth wedding anniversary, according to Extra. Hilaria revealed to People that it was actually her husband’s ideals to do the vow renewal and she also talked about the work that goes into marriage. She explained:

According to Page Six, the vow renewal was in front of a small group of family and friends and it took place in the Hamptons at the Wolffer Estate Winery in Long Island, New York.

In August 2011 is when Baldwin first started dating his wife Hilaria, who was a yoga instructor. Today, she still is active in promoting health and fitness. 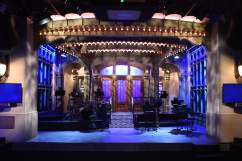