Houston today to see this ??? in my life. Can't wait to cheer him on this weekend ❤ I love @dannyamendola (he is instagram-less but I guess I can still tag ?)

Danny Amendola and Olivia Culpo have been dating for well over a year. The Miamia Dolphins wide receiver and the former Miss Universe were thought to be very serious, but on March 23, it appears Amendola unfollowed Culpo on Instagram. Culpo still follows Amendola and still has photos of them together (as recently as March 10), but rumors of a split are plentiful.

Amendola and Culpo began dating in 2016. She was on-hand at Gillette Stadium to watch her guy and his team take on the Jacksonville Jaguars in the AFC Championship.

“My baby is Mr Clutch!!! Go Patriots,” Culpo tweeted, shortly after Amendola scored a touchdown in the fourth quarter.

1. Amendola Attended the Opening of Culpo’s Family’s New Restaurant, The Back 40, in August

A couple of weeks ago, Amendola was on-hand to support his leading lady in Rhode Island. Culpo and her family opened their new restaurant, The Back 40, on August 28, as a “soft opening.” The eatery is something that Culpo has been super excited about for months. She has been updating her social media followers on the progress of the new place and she was ecstatic to finally open.

Culpo documented the night on Instagram, even going live at one point so that her fans could share in her joy.

The couple made things “official” on social media in early 2016. People couldn’t stop talking after they saw someone that looked just like Amendola on Culpo’s Snapchat. The picture wasn’t totally clear, but it showed a shirtless guy wearing a Patriots helmet standing next to Culpo who was also wearing a Patriots helmet. You can check out the photo here. Through some detective work, fans figured out that Amendola was the only Patriots player that Culpo followed on social media.

A short while later, Culpo made her relationship Instagram official. She posted a Boomerang of Amendola dipping her while the two were in Las Vegas together. It didn’t take long for fans to spot Amendola and realize that one of New England’s finest was off the market. You check out the Instagram post below.

3. Amendola & Culpo Celebrated His Super Bowl Win Together in Houston

Culpo wouldn’t have missed heading to the Super Bowl to cheer on her man for the world. The Rhode Island native has been a Patriots fan for most of her life (she switched up her Tom Brady jersey for an Amendola jersey once the two started dating), so supporting her beau’s team was completely natural.

Culpo arrived in Houston a couple of days before the big game and got to spend some quality time with her man before he became a two-time Super Bowl champion. She was in the stands with a couple of friends, but made it down onto the field after the Patriots won the game.

Months later, Culpo attended the Patriots ring ceremony held at owner Robert Kraft’s home. She posted some photos of the event on Instagram — and even got to wear her boyfriend’s new bling. 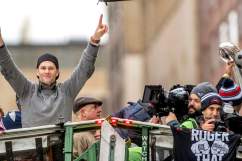 4. Amendola & Culpo Have Been on Some Pretty Sweet Dates

Love Is Everything ❤️

Amendola and Culpo have had a pretty incredible couple of years. They have traveled together — from Vegas to Bimini — and have also gone on some cool dates. For example, the couple attended a 2017 Met Gala after party together in New York City on May 1. Amendola looked dapper in an all black ensemble by Ermenegildo Zegna Couture while Culpo looked red-hot in Givenchy.

The two also went to Coachella together for the second year in a row. The two looked super casual at the annual music festival. They joined pals Jesse Metcalfe and Cara Santana for a sort of double date.

Aside from these big public events, Amendola and Culpo have done some normal kid things too. The couple has spent a good amount of time with family in friends in New England. They have shared quite a few romantic dinners together, as well.

Culpo was on-hand for Tom Brady’s annual football event for his charity, the Best Buddies Challenge. Those who attend are able to watch (and some get to play) football with Brady and some of his Patriots buddies from Julian Edelman and Rob Gronkowski to Jerod Mayo and, of course, Danny Amendola. Other celebrities and athletes are often at the event, which raises money and awareness for people suffering from intellectual and developmental disabilities. The football game is dedicated to “ending the social, physical and economic isolation,” according to the Best Buddies website.

Culpo seemed more than happy to participate in the 2017 event. She mixed and mingles with attendees and got to spend some on-field time with her main squeeze. Check out the video below to see Amendola teach his leading lady how to hold and throw a football.