Welcome to the family.

The champion New England Patriots received their Super Bowl LI rings in a private ceremony on Friday night. The team, including staff and other personnel, gathered at owner Robert Kraft’s home to receive their new bling in a lavish ceremony.

The guys arrived in style to a beautifully set up venue. At each player’s seat was a clear box with a lock on it, engraved with each player’s name. Inside that box was the coveted ring box.

Almost time to see the ?! pic.twitter.com/QoZEaUBKV9

The fifth @Patriots #SuperBowl ring has 283 diamonds, commemorating how many points the team was down by in #SuperBowl 51. pic.twitter.com/WpGgg8VXZX

In order to open the clear box and unveil their new rings, the Patriots had to figure out a 3-digit code. Kraft gave them clues, and once the numbers were entered correctly on the lock, the boxes opened and the team got to see the new baubles.

Most of the players, including Danny Amendola and Julian Edelman, posted photos and videos on their social media accounts, showing off their new rings. But, of course, the one person that everyone wanted to see, was quarterback Tom Brady himself, wearing all five of his Super Bowl jewels.

The photo you've been waiting for. pic.twitter.com/ylymVAzlUp

The @Patriots #SuperBowl ring has 283 diamonds, commemorating how many points the team was down by in #SuperBowl 51.

Let that sink in… pic.twitter.com/rmW1BLg5qV

The ring itself is completely iced out (that’s slang for covered in diamonds). It is said to have 283 diamonds, to be exact, commemorating how many points the team was down in the third quarter. It features the team’s five recent Lombardi trophies on a blue face. The Patriots logo is front and center and the words “world” and “champions” flank the sides.

The best part, perhaps, is the inscription on the inside of the ring. It reads, “greatest comeback ever.” The inscription refers to the Patriots incredible comeback win during Super Bowl LI. The team was able to overcome a 28-3 deficit against the Atlanta Falcons. The Patriots won the game 34-28.

Below are more photos of the team with their new rings.

Jimmy Garoppolo and Jacoby Brissett with their ? 's #Patriots pic.twitter.com/cFzdw7J6WH

That feeling when you see your Super Bowl ring. pic.twitter.com/vVic7Wp4Ho

Martellus Bennett appears to be very pleased with his new ring. #Patriots pic.twitter.com/0MtNg3UAUo

Below is a photo of the four other recent Super Bowl rings.

The Patriots will receive their new Super Bowl rings tonight. Which of their first four is your favorite? https://t.co/ggPY3uvnkD pic.twitter.com/XYgQVwODwW 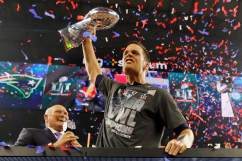