Roberts was known for his love of the outdoors, and for his unwavering commitment to teaching, inspiring, and creating. An article written in Preston’s honor written by the Turtle Island Preserve, an outdoor education camp where he worked, reads, “Preston was as practical as he was creative, and over any abyss he would find a way to build a bridge whose quality was matched only by its beauty… his life and spirit are infused all over Turtle Island, in the buildings, the ceremonies, the land, and the misty mountain air itself.”

Mountain Men follows the lives and struggles of several families as they live off the grid. The series is set in Alaska, Montana, Wyoming, New Mexico, Maine, and North Carolina. Season 6 of Mountain Men premiered on June 8, 2017.

Read on to learn more about Preston Roberts, his death, and his legacy:

1. He Died from Complications from a Liver Tumor

Preston died from complications from an inoperable liver tumor. On July 24, his website was updated to reveal that the tumor prevented oxygen and blood flow and his body shut down within the course of three weeks.

Preston’s death was announced on Facebook by his dear friend, Eustace Conway, whom he met in 1982. In August, Eustace wrote an emotional message on social media, thanking friends and fans for raising a large sum of money to support Preston’s family. A portion of the note read, “Thank you to everyone expressing support as I try to survive losing my best friend of 35 years. Preston’s constant loyal support and inspiration was the best thing I ever had in my life. His kindness and humble talent were unsurpassed.”

A Go Fund Me page was created in Preston’s honor to help his family pay for medical expenses, a memorial service, and the family’s leaking roof.

Over 2,500 friends, family, and fans have given money and helped raise funds for Preston’s family.

The Roberts’ roof was repaired in August using money from the Go Fund Me page, according to Eustace Conway.

3. He Is Survived by His Wife and Three Sons

Roberts met his wife, Kathleen, in 1975. The two married quickly, and raised three sons. In 2015, they celebrated their 40th wedding anniversary.

4. He Was an Art Teacher for 25 Years and Was Twice Named Teacher of the Year

The History ChannelPreston Roberts and his dear friend, Eustace Conway.

According to the Journal Patriot, Preston was an art teacher in the Wilkes County schools for 25 years. He was twice elected the teacher of the year, and retired in 2010.

Speaking to the outlet after Roberts’ death, Eric Barker, the school’s transportation director, said, “Preston was certainly a great educator, a true gentlemen and a friend to us all.” He added on, “He just brought out the best in his students, especially their personal creativity expressed in his art projects…. When he had something to say, you wanted to listen. His knowledge and personal take on things would be of great value to the school and community.”

Roberts attended Atlantic Christian College, and received his degree in Art Education at Appalachian State University. At the time of his death, he also sat on the Board of Directors at Turtle Island preserve, which he created with Eustace.

5. A New Season of ‘Mountain Men’ Has yet to Be Announced

It is unclear if there will be another season of Mountain Men. The History Channel has not made an announcement and cast members have not shared photos of a new season being filmed. 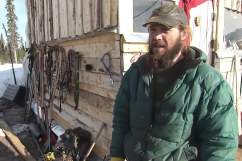