Showtime Kyle MacLachlan in a still from Twin Peaks.

Well, the Twin Peaks Season 3 finale has come and gone, and fans aren’t sure how they feel about it. Some fans think it was absolutely perfectly David Lynch. And other fans are angered by the ending, wishing they had more closure and not so many unanswered questions.

If you’re still reeling from that ending, then you might really enjoy these confused and angry tweets, memes, and reactions from other fans.

Some fans are disappointed.

@sherilynfenn1
really wanted more of Audrey's story.
Huge #TwinPeaks fan, but this was a let down.

Or angry. To say the least.

Others thought it was good, but missing some of their favorites.

One thing I know for sure: I will always have a soft spot in my heart for #twinpeaks. Also: the finale needed more Gordon Cole.

And remember when we thought watching someone sweep was the toughest part?

Whoo, and I thought watching that guy sweep up for 10 minutes was uncomfortable. #TwinPeaks

If @Showtime's goal was to get people talking about the #TwinPeaks #TwinPeaksFinale w/ THAT ending, then @DAVID_LYNCH pic.twitter.com/ryyFCd5hoc

Me and Teto right after finishing the finale of #TwinPeaks pic.twitter.com/zGDKxaUZm6

I HEARD U GUYS WANT SOME ANSWERS? GUESS WHAT? MY NAME IS NOT GOOGLE. #TwinPeaksFinale #TwinPeaks pic.twitter.com/z124NXXTtz

And … Did Cooper just mess everything up and make it worse than it was before?

Remember when fans were confused 25+ years ago?

#TwinPeaks explained by The National a la Pink Rabbits pic.twitter.com/Vvgss0rvM9

This pretty much sums up the finale perfectly.

Here are a few more reactions you might relate to:

I did love it but I can't ignore that the #TwinPeaksFinale brought this gif to mind…. #TwinPeaks pic.twitter.com/XuLgp70YGh

And you thought football this weekend was tough…

Everyone's made about #TAMUvsUCLA and I'm here dealing with #twinpeaks literally shattering everything I hold dear and mentally killing me.

Fans are really hoping this means we’ll get a Season 4.

But some people absolutely loved all the unanswered questions.

You, dumb: the #twinpeaks finale left too many unanswered questions

And some people didn’t like the ending, but still enjoyed the season as a whole.

#TwinPeaks was better than I expected, in ways I never would've imagined, that nonetheless ended just as moronically as the 2nd season.

Lynch is probably enjoying these reactions.

David Lynch, looking at the reactions to the #TwinPeaks finale: pic.twitter.com/MlsiS30csg

One thing is for sure, we’ll be analyzing this episode for a long time.

Me trying to figure out what the #TwinPeaks ending means pic.twitter.com/q4UvABR8LX

What did you think about the finale? Frustrating or beautiful? Too many questions left unanswered or a work of art? Let us know in the comments below. 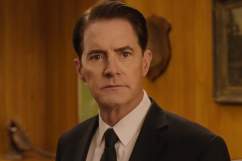