I have to say a huge thanks to everyone that was a part of the #TPCR40. Another incredible experience that I will remember forever. Sad it's over…

Frankie Muniz is known for his role on Malcolm in the Middle and now for being one of the front-runners on Dancing With the Stars. But, he has also made a name for himself in race car driving as well. Unfortunately, in racing, Muniz has suffered several injuries, from broken hands to a broken back, and he is definitely feeling the pain while training for DWTS. Muniz also suffered mini strokes in 2012 and 2013.

I was in the hospital last Friday. I suffered a "Mini Stroke", which was not fun at all. Have to start taking care of my body! Getting old!

On the premiere episode of DWTS season 25, Muniz told pro partner Witney Carson that, “I had a crash and broke my back and injured my hands and ribs.” He also went on to tell People:

I think we talk about my injuries every day because I have a creaky, old body. I’m 31 but feel like I have the creaky, old body of a 71-year-old. But I’m doing whatever it takes to take care of my body so I can continue dancing. I’ve raced Indy cars, I’ve played every sport, I consider myself a pretty athletic person, but I’m so sore. I’m so dead. I’m in the sauna, I’m icing. Everything that I’m doing every minute of the day is to make me a better dancer in this competition and make it to the end.

In 2012, after Muniz suffered his first stroke, he stated on Good Morning America:

I couldn’t say words. I thought I was saying them! My fiancee was looking at me like I was speaking a foreign language.

Then, a year later, Muniz suffered his second mini stroke, according to ABC News.

Recently, Muniz revealed that he was getting Cryo therapy at Cryo Healthcare to help with his back, as well as his overall health. He posted a photo on Instagram, writing:

This place is a game changer, a life saver, and my favorite place to get buck naked and freeze my buns off at! @cryohealthcare has literally saved me on this season of #DWTS! My back issue is extremely real and extremely painful, but cryotherapy has helped so much to alleviate some of the pain and help with my overall sore muscles! I can’t say thank you enough! 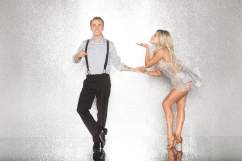