During the Mr. Robot Season 3 premiere, some viewers felt like they were pulled out of the show when a wild President Trump appeared when he really shouldn’t have. The show is getting some mixed reviews of how that went down, and some fans are confused about how Trump fits in the timeline. After you read this article, take the poll at the end and let us know what you thought of the monologue scene.

This post has spoilers for the Mr. Robot Season 3 premiere.

Fans have mixed feelings about Elliot’s monologue near the end of the Mr. Robot premiere. Elliot’s monologue itself was wonderful. It was a great contrast to his monologue from the Season 1 premiere, and it shows just how far the character has progressed and changed. Now he’s no longer mad at society and blaming society, he’s mad at himself and blaming himself. He’s ready to go to war with Mr. Robot. (But that will be easier said than done.)

Some fans aren’t so happy, however, with President Donald Trump’s appearance during Elliot’s monologue. A montage of videos showed clips of Trump as President, along with clips of the prototype of the wall being built.

If you’re wondering, the show didn’t suddenly jump ahead to 2017. (No, we didn’t travel in time without realizing what was happening.) The show is still firmly in 2015 and Barack Obama is still President in the show’s timeline. The end of Season 2 was just a few months after 5/9/2015, and Elliot’s coma wasn’t that long. The 2016 election hasn’t even happened yet in the universe of Mr. Robot.

Essentially, it appears that Elliot’s monologue was giving us a view of what Elliot’s actions could lead to in this show’s universe. However, Sam Esmail is vocally anti-Trump, so it was also likely an opportunity to put his own political views into the show.

Some fans think this took things too far. They felt like the scenes were jarring and confusing, since we’re not in 2017, and really broke the fourth wall, pulling them out of being immersed in the show’s world.

Other fans aren’t so bothered, and think the scenes were a nice touch. They say it was a nice way of tying the current political climate into Elliot’s actions and the rise of social unrest. Some add that it’s a metaphor to the unforeseen consequences that can happen from just wanting to “burn” everything down.

Fan reactions online help illustrate just how divided they are about that monologue scene:

Wow @whoismrrobot really disappointed in the hits on Trump and the boarder wall. @BarackObama illegally spied more than anyone #MrRobot

Lame but what do u expect from liberal hollywood. Smh https://t.co/0zdCGr9TSu

I was stunned, even said "Oh my God!" outloud.

Then there’s this creative idea:

What do you think about the monologue scene with Trump? Let us know in the poll below. 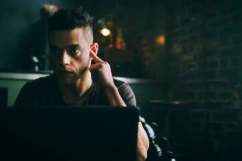