Rick and Morty Season 3 is coming to an end, and fans are already planning ahead, looking to Season 4. Here’s everything we know so far about Season 4, as of the time of publication. We’ll update this story after the Season 3 finale finishes airing, if additional details are released.

1. The Premiere for Season 4 Will Be ‘A Really Long Time’ From Now

A premiere date for Season 4 of Rick and Morty hasn’t been announced yet. And considering how long it took us to find out about Season 3’s premiere, that’s not a big surprise. In the after-credits scene during the Season 3 finale, Mr. Poopy Butthole did warn that it would be a really long time before the show returned, and this time he might have a long white Santa Claus-like beard. Some fans are hoping this means we’ll get a Christmas special for the show. But other fans think it just means we could be waiting two years again.

Season 1 of Rick and Morty premiered on December 2, 2013 and the eleventh and final episode of the season aired on April 14, 2014.

It looks like Adult Swim has a bit of a pattern established for Rick and Morty, with seasons premiering in July and ending in October. So Season 4 will likely be back in July again, although which year it will return is unknown. Hopefully it won’t take two more years to get a new season.

2. Season 4 May Have More Episodes Than Ever Before

Dan Harmon kind of makes it sound like they'll deliver a 14 episode #RickandMorty Season 4. (season 3 was originally intended to be 14) pic.twitter.com/rIqTdC68aU

Fans were disappointed when Season 3 of Rick and Morty only had 10 episodes, especially considering an earlier comment from Dan Harmon that seemed to indicate we might have as many as 14 episodes. But Harmon has said, essentially, that he’s open to the idea of more episodes in Season 4. Unlike some article’s portrayal, he didn’t say specifically that it will happen. But it might.

He told EW in an interview:

I would like to think I’ve learned enough from my mistakes in season 3 that we could definitely do 14 now, but then I have to say, “Yeah but you’re the guy who says we can do 14 who turned out to be wrong so we’re not listening to you now.” The nice healthy way to approach this is I want to prove it with the first 10 of season 4 — prove it to ourselves, to production, to the network — that it’s so easy that we’ll earn additional episodes. Because I never got this far [working on NBC’s] Community. I fell apart in season 3 of Community and got fired in season 4. Now I’m about to do season 4 of Rick and Morty and want to prove that I’ve grown.

So, in a nutshell, Harmon wants to prove that it will be easy for him to produce 10 episodes in Season 4, so Adult Swim will consider allowing the new season to be 14 episodes instead.

Harmon must be feeling pretty confident about Season 4. He’s already joking about it. Here’s a tweet he sent out on July 21, 2017:

.@JustinRoiland here is our itinerary DO NOT SHOW THIS TO ANYONE SENSITIVE INFORMATION pic.twitter.com/3EFvkmzmkx

He sent out a made up itinerary with a lot of jokes in it, including “Delay Season 4 Rick and Morty” and 5 p.m., and “Prevent Community Movie” at 5 p.m.

Fans are hoping this lightheartedness means that he’s pretty confident and will be able to turn around Season 4 faster than Season 3.

4. The ‘Rick and Morty’ Crew Already Have Ideas for Season 4 that Evolved from Season 3’s Writing Process

Here’s some good news: the Rick and Morty creative team already has access to a lot of ideas for Season 4, thanks to the creative process that brought us Season 3. Throughout the creation of Season 3, some story ideas for episodes would end up evolving into completely different plots once they were finished, he told EW. For example, the Mad Max episode was originally supposed to be an episode where they entered the universe of a book that Jerry wrote. The episode morphed into something so different that they could still do the original idea if they wanted.

Harmon told EW: “But we don’t back off on stuff so much as we say ‘maybe later’ and move on. We have a pretty hefty shoebox from season 3 of ideas that are ready to go. Some are fully written, in fact.”

Waiting nearly two years for Season 3 was hard enough. But knowing it might happen again has fans ready for Season 4 to start now. Here are some posts that are already being shared online about the whole thing.

am i allowed to be sad that Rick and Morty Season 3 is already over? I have to wait another year to see Season 4. RIP

one more episode left of rick and morty and we have to wait two or three years for season 4 pic.twitter.com/4moZSAz9zL

Season finale of @RickandMorty tomorrow? Season 4 comes out in, what, 5 years? ??

Frick season 3 of Rick and Morty is ending, they better not make us wait another eternity for season 4 skjzdnhcflz

Are you ready for Season 4? Let us know what you thought about Season 3 in the comments below. 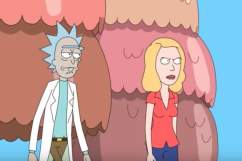 ‘Rick and Morty’ Season 3 Episode 9: What Did Beth Choose? Did She Leave?