Dominick Brascia is a former actor best known for his roles in films like Friday the 13th: A New Beginning, My Life as a Troll, and Evil Laugh (1986). Brascia has made bold claims about Charlie Sheen, telling the National Enquirer that Sheen raped a teen-aged Corey Haim.

Haim died of pneumonia back in 2010. For years, there have been rumors about Haim being sexually assaulted by a huge Hollywood actor. The Enquirer claims to have reached out to “more than 100 people” about these claims and reports that Brascia and “dozens of other sources” had stories about Sheen that matched up.

Sheen’s lawyers told the Enquirer that Brascia’s claims are false and that the actor never had sex with Haim.

1. Brascia Told the ‘Enquirer’ that Haim Confided in Him Before He Died

Brascia shared information in an explosive interview in which he makes bold claims about Sheen. Brascia told the National Enquirer that Haim confided in him years ago, telling him that Sheen raped him. At the time, Haim was just 14 years old.

Brascia said that Haim also told him about another sexual encounter that he had with Sheen a few years later.

“Haim told me he had sex with Sheen again. He claimed he didn’t like it and was finally over Sheen. He said Charlie was a loser,” Brascia told the outlet.

The Enquirer goes on to highlight Corey Feldman‘s book, Coreyography: A Memoir: Corey Feldman, claiming that one excerpt in particular “mirrors” Brascia’s claims, though Feldman, who was Haim’s best friend, doesn’t mention Sheen by name, nor has he ever confirmed nor denied who the actor accused of sexually assaulting Haim is.

“At some point during the filming [of ‘Lucas,’ Haim] explained an adult male convinced him it was perfectly normal for older men and younger boys in the business to have sexual relations, that it was ‘what all guys do,'” Feldman wrote. “So they walked off to a secluded area between two trailers during a lunch break for the cast and crew, and Haim, innocent and ambitious as he was, allowed himself to be sodomized.”

In September 2016, reports that Haim had been sexually abused were brought to the forefront when a man named Greg Harrison spoke out. According to Perez Hilton, Harrison accused Brascia of being the person behind Haim’s abuse.

“Sure it’s totally not true. I’m as shocked as anyone else he was one of my good friends, I knew him for over 25 years. I started to [do] movies with him and as you know he was the store [sic] so he had to give approval. He actually asked the director if they give me a part in National Lampoon’s Last Resort. And we work together on Busted, truth is he was really, really stoned and couldn’t finish the job,” the statement read.

Brascia went on to reiterate that the person who sexually assaulted Haim was a middle-aged adult (a male in his 40s) — which would have ruled him out since he was approximately in his late 20s at the time. For reference, Charlie Sheen is currently 52 years old — about 10 years younger than Brascia.

“He [Haim] was 14 or 15 and his abuser whose identity he never revealed was in his forties. I’m in my fifties, the guy would be 73 today. If you believe this ‘friend of Corey’ you must believe Corey Haim lied.”

3. Brascia Was Good Friends with Haim & Was with Him When They Bumped into Sheen Years Ago

Brascia and Haim were good friends for many years. In 2015, Brascia found himself in the middle of sexual assault claims involving Haim. According to Radar Online, he opened up about his friendship with Haim and spoke a little bit about said claims. Not only did he vehemently deny being involved in any kind of inappropriate relationship with Haim, but he revealed that his friend “was so afraid that he might be gay” and mentioned that Haim “wanted to kill himself” because of it.

Brascia recalled being out to dinner one night with Haim when the two men spotted Sheen nearby. Brascia told the National Enquirer about an exchange that he says Haim had with Sheen that night.

“Brascia revealed he witnessed Sheen become hostile when Haim approached him at a Los Angeles restaurant. He told The Enquirer a drunken Sheen sat at a dinner table with two A-list stars when Haim approached him and asked, ‘Hey Charlie, remember me? How you doing, Charlie?’ In reply, Sheen claimed he didn’t know Haim, and bellowed: ‘Who are you? I don’t know who you are.’ But later in the evening, Brascia said, when he found himself alone with Sheen, the actor confessed how he really felt about Haim. ‘I’m really not that drunk,’ Brascia recalled Sheen saying. ‘I just don’t like that little a–hole. I hate that a–hole. Get him out of here. He’s a freaking jerk.'”

4. Brascia Has Written, Directed & Starred in a Few Movies & Is Currently a Radio Host

Brascia studied broadcasting and theater at the University of Nevada, Las Vegas. He is most well-known for his role in Friday the 13th: A New Beginning, which was released in 1985.

In 1988, Brascia directed Evil Laugh, a horror movie which was shot from start to finish in just a few days. Later that same year, he directed his second film, Hard Rock Nightmare. After taking a bit of a break, Brascia returned to the director’s chair for the 2001 film, My Life as a Troll. The following year, he directed Breaking the Cycle.

Over the course of his career, Brascia has also acted in several television shows from Knight Rider to Night Court.

After the 80s, Brascia broke into the world of radio, landing himself a gig on 840 KXNT in Las Vegas. In the years that followed, Brascia moved to Denver, Colorado, where he hosted a weekday morning show called “Dominick and Bill Live.” He also had shows in Texas, Alabama, and in California.

He currently has a show on KMMS out of Bozeman, Montana, where he is aired alongside the likes of Sean Hannity, Rush Limbaugh, and Glenn Beck.

“On ‘Dominick in the Morning’ I try to show the listeners how things happening nationally and around the world are affecting them in their everyday lives, plus help them start the day with a laugh,” reads his KMMS biography.

5. Brascia Has Been Active on Social Media & Even Did a YouTube Episode of ‘Cribs’ as a Joke in 2012

Caution: The video above may contain some language that is NSFW.

As you can see in the video above, Brascia has a good sense of humor and he likes to entertain people. However, with his story about Sheen and Haim going live this week, it appears as though he has gone private across most of his social media accounts.

His Facebook account does have some public-facing information, but he only interacts with people who he’s “friends” with on the social networking site. His bio confirms that he is “in a relationship” and has been since 1998, but it is unclear with whom.

His Twitter account is currently private; the only outward-facing thing is his bio which reads, “Lies, rumors & gossip are not True because you THINK they are. Words Hurt. Think b4 text. Retweeting a lie, doesn’t make it true. No record, not a Criminal.” 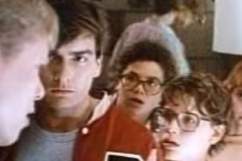