Property Brothers star Drew Scott has been a contestant on season 25 of Dancing With the Stars with pro partner Emma Slater and now he is incorporating Slater in his wedding with fiancee Linda Phan. People reports that Drew Scott and Slater have become close friends, so Slater and her fiance, DWTS pro Sasha Farber, have been added to the wedding guest list. Scott gushed that, “Oh, 100%. They’re definitely coming. Emma and Sasha are teaching Linda and I our first dance! … They’re teaching us to swing dance and then we’re also looking to do a little rumba, some hip hop.It will be epic.” He also revealed that, “Linda and I do a lot of dancing in our living room but for me to get an opportunity to take on this challenge … I mean, I’m a life-long student, I always love tackling something new. “I want to be in there until the end. And I couldn’t have asked for a better partner.” Scott and Phan reportedly will be dancing their first dance to “Turn the Lights Down Low” by MAX.

In addition to participating in the wedding, Emma Slater and Sasha Farber are set to “make an appearance” on Phan and Scott’s new HGTV series, Property Brothers at Home: Drew’s Honeymoon House. The show premieres November 22, 2017. HGTV describes the new show as this: “It’s a family affair from beginning to end as Drew finds the home, Jonathan Scott designs it, and Linda oversees the decorating.” For those unfamiliar with the Scott brothers, Jonathan is Drew’s twin. On the premiere episode of the new show, the trio will “begin transforming the home from tired to luxurious with projects in the entrance, powder room, office and living room.” The Scott brothers and Phan have just 12 weeks to take on this project and make it into their dream home, which will include a room suitable for a nursery. Scott revealed to People that, “I wanted to make sure this house can function for kids, too … This house is meant to last us a really long time. We’ve put into it everything we can possibly put in, so we can enjoy it now and we can enjoy it as our family grows.”

Grooming the groom-to-be! 😜 . 🙈We've been planning the big day AND working on @PropertyBrothers At Home #HoneymoonHouse ❤️🏡❤️All I can say right now is Eeeeeeeeeeeeeeeee 😁!

Previously on Dancing With the Stars, Scott gushed about his fiancee and paid tribute to her in one of his performances. When talking about the routine he dedicated to Phan, Scott wrote in his People blog that, “When I fell in love, my perception of life simply changed. I looked at things through a different lens — one of optimism and deeper meaning.” According to HGTV, the couple met at a fashion week event and dated for six years. Scott then proposed to Phan in an elaborate dinner and he revealed the engagement on his Instagram account in December 2016, writing, “From the first moment I met Linda, back in 2010, I knew she was special. And last night I became the luckiest man on the planet when she said #ido.” 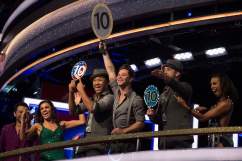 Who Will Be Eliminated on Tonight’s ‘Dancing With the Stars’ Semi-Finals?