Tonight at 9 p.m. Eastern (8 p.m. Central), Hallmark Movies & Mysteries’ latest Christmas movie, A Bramble House Christmas, will premiere. It’s a story of a woman who receives an unusual gift in a patient’s will, and how it leads to an unexpected possible love. The movie stars David Haydn-Jones and Teryl Rothery. After you read all about this movie and watch it, come back and share any comments or questions that you may have about the movie in our comments section below. Take time to let other readers know what you thought and talk about the movie with other viewers.

Shortly before Christmas, single mother and healthcare worker Willa Fairchild learns that she is a beneficiary in a recent patient’s will. Moved by the sacrifices Willa made to give her son Scout a second chance at life, Greg Conrad wanted his nurse to have her own opportunity for a fresh start. In addition to a cash bequest equal to the family’s medical bills, Greg arranged for Willa and Scout to experience the magic of Christmas at the Victorian-era Bramble House in Bramble, Oregon…

The movie stars Autumn Reeser as Willa Fairchild. She has a long and successful history on film and TV, including Valley of the Bones, Kill ’em All, Sully, Dead Trigger, Last Resort, The OC, Entourage, Valentine, The Whispers, Royal Pains, Star Trek: Voyager, Pushing Daisies, Ghost Whisperer, Human Target, Raising the Bar, Complete Savages, So Undercover, The Big Bang, Lost Boys 2, and many more. She’s also starred in numerous Hallmark movies, including Valentine Ever After, I Do I Do I Do, Midnight Masquerade, Love at the Thanksgiving Parade, and A Country Wedding.

Also starring as a lead in the movie is David Haydn-Jones as Finn Knightly. He’s been on numerous Hallmark movies including Bridal Wave, A Cookie Cutter Christmas, and more. His other film and TV appearances include Dear Santa, The Gabby Douglas Story, The Toyman Killer, Fatal Trust, Rumours, Modern Family, Mistresses, Criminal Minds, NCIS, Judging Amy, White House Down, All Alone, The Last Kiss, and Supernatural.

In an interview with David Haydn-Jones, who stars in the movie, Haydn-Jones shared that he really enjoyed working with Autumn Reeser. He’d never worked with her before, but Danica McKellar had put in a good word for him. (You can read the full interview here.) He said they worked well together because they take their work seriously, but they don’t take themselves too seriously. He said the movie’s darker themes were likely why it was on Movies & Mysteries and not the Hallmark channel:

It’s got a lot more drama and edge in it. … There are some darker themes in it. And there’s also some lies and betrayal and manipulations that are a little darker than say, a cookie baking contest. Not that there’s anything wrong with cookie-baking hijinks at all. But this one goes a little shrewder and darker, if that makes sense.”

Here are some more photos to get you in the holiday mood, all courtesy of Crown Media:

Let us know what you thought about the movie in the comments below. 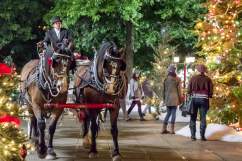 Where Was ‘A Bramble House Christmas’ Filmed? Was It Really in Oregon?