Go Trojans! ✌️❤️✌️❤️ Still a family outing! ??? And for those that have negatively commented, it’s all about my kids. Have a nice night.

Shannon Beador and her husband David Beador have worked for years on their marriage, even overcoming David’s affair with a woman who befriended Shannon as well. David admitted to cheating on his wife with a 43-year-old business executive who was also married, but Shannon and David decided to attend counseling. In addition, David apologized to his daughters for the affair and he even planned an elaborate, surprise vow renewal, which was televised on Real Housewives of Orange County. Sadly, the couple, after 17 years, has decided that they need to call it quits. On October 27, 2017, the Beadors released the following statement to The Daily Dish to announce their separation, “After much thought and careful consideration, David and I have made the difficult decision to separate. We remain partners in parenthood and are committed to raising our three daughters. This is not the future we envisioned, and we kindly ask for privacy, especially for our children, during this transitional time.”

In an interview with People, Shannon has said that her fellow cast-mates have been very supportive of her as she goes through this difficult time. She said that it became hard to watch the show, realizing she was in denial about her failing marriage. Shannon said she felt alone and that her relationship turmoil was taking its toll on her. It wasn’t a healthy situation for Shannon or her three daughters with husband David. Shannon opened up to People, saying that, “This is not the path that I thought that I would be taking. To come from the highest of the highs last year to go to such a low so quickly? At the beginning when it starts to crumble, you think, ‘This is just a phase. It’ll get better.’ But it never did … As a mother you keep thinking about your daughters and you have to say, ‘This is an unhealthy environment.’ Not only is it unhealthy for me, but it’s unhealthy for my girls, too. They deserve a happy and joyful home, and I am providing that for them now … At this point it’s scary, when you’re 53 years old, to be out there on your own. But I intend to show myself and my daughters that it can be done. I’m ready to get the old Shannon back, that’s for sure.”

It’s clear that Shannon and David Beador are trying to keep life as normal as possible for their kids. They even got together to watch one of their daughters at the USC Homecoming game at the L.A. Memorial Coliseum, as reported by E! News. A source revealed to E! that, “Shannon doesn’t want their issues to ruin their kids’ lives so it’s important to her that they still do things as a family and try to get along for the sake of the kids, especially with the holidays coming up. They plan to spend them all together like they always have. She wants the transition to be as smooth as possible for everyone.” 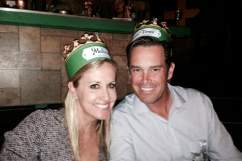