Tonight at 8 p.m. Eastern (7 p.m. Central) on Friday, November 24, Hallmark’s latest Countdown to Christmas movie, Christmas in Evergreen, will premiere. The movie stars Ashley Williams, Teddy Sears, Holly Robinson Peete, and Barbara Niven. After you read all about this movie and watch it, come back and share any comments or questions that you may have about the movie in our comments section below. Join in the discussion with other readers.

To find out what channel Hallmark is on for you, click here to go to TV Guide’s listings. Then change the “Provider” (right under TV Listings) to your local provider. You’ll be able to scroll down to see what channel Hallmark is on for you. (To find out how to stream Hallmark’s Christmas movies live, see our story here.) If you miss the movie tonight, you’ll have lots of other times to catch it. Just visit here and click on “Showtime” to find all the encore times.

Here’s the synopsis for the movie from Hallmark: “Snow globes can have a magical, mesmerizing sway over those who concentrate on them. No one knows that better than residents of Evergreen, Vermont. In this bucolic burg, where families have lived for generations and take care of each other, there’s a belief that if you wish upon the snow globe in the local café, that wish will come true. The only catch is the wish must be completely sincere. When the town veterinarian wishes that this will be her most romantic Christmas ever, she figures that will happen with her longtime beau. Stranded in an airport, she befriends a businessman and his daughter, who had made her own wish on the snow globe. The magical Christmas they share turns out to be more than anyone wished for.”

Hallmark also provided a different synopsis for the movie. This one reads: “Allie, a veterinarian in Evergreen, reluctantly will spend Christmas with her long-distance boyfriend. Bound for the airport, she has engine trouble, and Ryan, headed to Florida with his daughter Zoe, stops to help. Sure they won’t meet again, they ignore their attraction, and part ways. At the diner, Zoe wishes on a snow globe, and a storm seems to grant her wish… Something is keeping Ryan, Zoe and Allie in Evergreen, and it might have a lot to do with Nick, a new guy in town who seems to know a bit about Christmas magic…”

Holly Robinson Peete also stars in the movie as Michelle. She has a long and successful history, including appearing in TV and films like Chicago Fire (Tamara Jones), Angel of Christmas, Instant Mom, Mike & Molly (Christina), Blue, RuPaul’s Drag U, 21 Jump Street, The Bridget Show, Love Inc. (Clea), Like Family (Tanya Ward), One on One (Stacy), For Your Love (Malena Ellis/Melena Ellis), Strong Medicine, The Jacksons: An American Dream, 21 Jump Street (Judy Hoffs), Booker, and more.

Barbara Niven also stars as as Carol Shaw, Allie’s mom. You may recognize her from the popular Hallmark series Chesapeake Shores, on which she currently stars. She has many past appearances on TV and film, including Murder She Baked, A Christmas Detour, Cedar Cove (Peggy Beldon), Parks and Recreation, The M Word, Being Us, A Perfect Ending, The Wife He Met Online, Home Invasion, My Mother’s Secret, Accused at 17, Eli Stone, A Valentine Carol, Charmed, NCIS, One Life to Live (Liz Coleman Reynolds), Pensacola: Wings of Gold, Silk Stalkings (Sally Coats/Jackie McMillan/Amanda Langley), Pacific Palisades, and more. 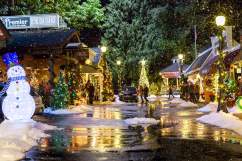 Where Was Hallmark’s ‘Christmas in Evergreen’ Filmed?