According to Inside Survivor, season 36 is titled Survivor: Ghost Island and there will be 20 brand new contestants in the mix. Survivor 36 is reported to be similar to the Exile Island season and Inside Survivor reveals, “Ghost Island will be populated with advantages from past seasons. These advantages are said to be ones associated with past mistakes.” Surviving Tribal reports that the premiere date for Survivor 36 is set to air on the CBS network on February 28, 2018. The premiere will be a two-hour episode and the location of the show is definitely Fiji again, since host Jeff Probst told Entertainment Weekly that Fiji is his preference. Though the show has filmed all over the world, the last four season have all been filmed in Fiji. Probst explained why Fiji is his top choice, stating that, “The real truth of the world is, when we started Survivor 18 years ago, there were lots of places we could go. It’s been two decades. It’s a different world. There are not as many places we can go for lots of reasons — the economy, population, political unrest, weather patterns.”

Get excited! 20 new Castaways compete for $1M on the 36th Edition of #Survivor #GhostIsland with a special 2-Hour Premiere 2/28 from 8-10PM! @jeffprobst

Probst also told Entertainment Weekly, “Fiji offers us everything that we want. Incredibly beautiful water that you can see down 30 feet, beaches that are amazing, a government that is working with us, local labor that loves to say ‘Bula!’ every day because they’re just happy you’re here. And our crew has never been as happy. We actually have decent accommodations to do this show out in the jungle. It’s a win-win-win.”

The new season has already filmed and each of the 20 contestants are vying for the usual $1 million prize. In an official release from CBS, the details on the upcoming premiere reads, “The next installment of the Emmy Award-winning Survivor taking place in Fiji debuts with a special two-hour episode on Wednesday, Feb. 28 (8 – 10 p.m., ET/PT), after Big Brother and The Amazing Race conclude. It moves to its regular Wednesday (8 – 9 p.m., ET/PT) time period on March 7, 2018.” 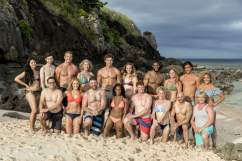