Rihanna’s cousin, Tavon Alleyne, was shot and killed the day after Christmas. Rihanna spent the holiday in her native Barbados with Alleyne, 21, and took to social media to share the heartbreaking news of his passing.

“RIP cousin… can’t believe it was just last night that I held you in my arms! never thought that would be the last time I felt the warmth in your body!!! Love you always man,” Rihanna posted on Instagram.

1. Alleyne Was Shot ‘Several Times’ & Died at the Hospital

Alleyne was walking on a track near his home around 7 p.m. local time when he was shot “several times” by an unidentified suspect, according to TMZ.

Reports indicate that Alleyne had been celebrating Boxing Day, but it’s unclear where he was walking to/from at the time of the shooting. Based on said reports, it is believed that Alleyne was alone when he was shot.

Alleyne, who lived in Lakes Close, Eden Lodge, St Michael, was rushed to nearby Queen Elizabeth Hospital in a private car, but his injuries were too severe and he was pronounced dead a short time later.

2. Police Are Still Searching For a Suspect

Police have revealed that the suspect is a male, but they do not have a name or a description. After shooting Alleyne several times, the assailant fled the scene. It is unclear if he fled on foot or in a vehicle. It is unknown if anyone saw the suspect when he was in the area that evening.

At this time, it is unclear if this murder was random or if Alleyne was the intended target.

Police have launched an investigation and are actively looking for any information that may lead to an arrest.

3. Gun Crime Is a Widespread Problem in Barbados & Rihanna Made Mention of That in Her Post

Over the years, gun crime in Barbados has become a real problem. In fact, gun crime has increased 57 percent in comparison to this time last year, according to Acting Assistant Commissioner of Police responsible for crime, Colvin Bishop.

In 2017, there have been a total of 28 murders. According to police records obtained by the Jamaica Observer, 22 of those murders were gun-related.

“This year our policing strategy to combat the use and possession of illegal firearms has been built on four planks: namely interdiction, enforcement, prosecution and education. Our efforts to prosecute persons for firearms has resulted, thus far, with 153 firearms-related offenses being placed before the law courts compared with 133 for the year 2016. Our enforcement efforts have resulted in the removal of several firearms from the hands of criminals. To date, combined law enforcement efforts have resulted in the seizure of 91 firearms as compared with 71 for the same period last year. The most prevalent firearms recovered were .9mm, .40 and .45 calibre pistols,” Bishop told reporters.

Over one million people offered support to Rihanna during this difficult time, “liking” her post about her cousin. Thousands more left comments, wishing her peace during this tragic time.

Additionally, hundreds of people have been posting on Alleyne’s Instagram photos, leaving heartfelt messages and condolences.

There has been some confusion on Alleyne’s Instagram page because a lot of the photos that he has posted aren’t actually of him. Many people have been leaving “RIP” comments on photos that are of other people who were important in Alleyne’s life. Other Instagram users have been doing their best to make sure that people know that the person in the photo in which they are commenting is not actually Alleyne.

Although they didn’t get to spend too much time together, Rihanna and her cousin were extremely close. He often shared photos of the two together, which can be seen on his Instagram page.

“Every day we are happy to have you in our lives. Happy Birthday cousin, we really love you. Your presence in my life is a source of joy and happiness. To my favorite cousin, may all your dreams and wishes come true. #LoveYouLoads #wishyoumanymoretocome,” Alleyne posted on Instagram back in February in honor of Rihanna’s birthday. 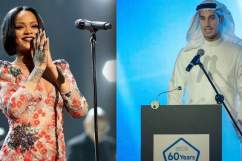