This Is Us is currently on break until 2018. The hit NBC drama series is set to return on Tuesday, January 9. The second half of the show’s second season will air on Tuesday nights from 9 p.m. – 10 p.m. There are just eight episodes left in the 18-episode season, which will wrap up on March 14, 2018.

The first half of the season ended with an episode titled “Number Three,” which gave viewers a deeper look into Randall’s life as a kid — and as an adult. Interestingly, the show’s creator, Dan Fogelman, told Deadline that viewers are going to learn a lot more about Randall. The third child of Rebecca and Jack Pearson will be heading back to Memphis to “develop a relationship with his extended birth family there,” just months after reconnecting with his biological father, William, who passed away in Season 1.

The first half of the second season ended on a bit of a cliffhanger, with all three Pearson children facing new challenges in their lives. Kate recently suffered a miscarriage, Randall and his wife, Beth, were forced to give up the young girl that they were fostering, and Kevin was arrested for a DUI, while his niece (Randall and Beth’s daughter, Tess) was hiding in the backseat of his car. As for what’s going to happen to Kevin, that much isn’t completely clear. While some expect that he’s going to wind up in jail, others hope that Kevin will ultimately get the help that he needs. Fogelman revealed that Kevin will indeed end up in rehab.

Perhaps at the very start of the second half of Season 2, there will be “an intense 12-minute dramatic scene” between Kevin, Kate, Randall, and their mom, Rebecca.

“They just go at it in an interesting way that I had to call of them into my office because there’s some really serious acting going on. We find Kevin in rehab, and the family has arrived to hash things out in a therapy session. It’s very loaded,” Fogelman told Deadline.

Additionally, This Is Us fans have been promised an answer about the mysterious fate of Jack Pearson. While fan theories have been plentiful over the past several months, Fogelman promises a “heartbreaking surprise.” That surprise is set to be revealed before the end of Season 2.

“We promised answers in Season 2 and we have eight episodes left, and it’s all coming in short order. It will really be a heartbreaking surprise,” Fogelman added.

Fogelman and the rest of the cast have been working hard trying to finish up the last couple of episodes of Season 1. They are currently in the middle of production on Episodes 14 and 15.

According to TV Guide, This Is Us is will air a “special episode” immediately following the Super Bowl on Sunday, February 4.

In other recent news, This Is Us has been nominated for several Golden Globe Awards, “including one for best drama and individual honors for Emmy-winner Sterling K. Brown, and Chrissy Metz,” according to CNN. 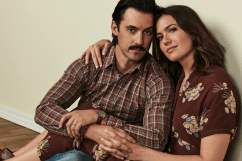