Christmas is almost here, and it’s the perfect time of year to curl up in front of the fire with a warm cup of cocoa and watch Christmas movies. Hallmark Movies & Mysteries has recently started airing some absolutely delightful holiday films that can really get you in the Christmas spirit. But how can you choose which to watch when time is limited and there are so many options? Maybe this is a first world problem, but it’s a real one! That’s why we’re providing a list of the 10 best Christmas movies that you’ll want to see from Hallmark Movies & Mysteries. So while you’re hanging the stockings by the chimney with care, start one of these movies to help get you in the holiday spirit.

To find out what channel Hallmark Movies & Mysteries is on for you, click here to go to TV Guide’s listings. Then change the “Provider” (right under TV Listings) to your local provider. You’ll be able to scroll down to see what channel Hallmark is on for you. (To find out how to stream Hallmark’s Christmas movies live, see our story here.) If you miss the movie tonight, you’ll have lots of other times to catch it. Just visit here and click on “Showtime” to find all the encore times.

Every now and then, Hallmark blesses us with a two-part series where we get to follow along in the lives of characters we’ve grown to love even after the first movie ends. This two-parter is one of those magical series, Wendy Malick, Erin Krakow, and Niall Matter. The first movie, Finding Father Christmas, has the following synopsis: “Three days before Christmas, Miranda unexpectedly receives a clue as to the whereabouts of her father, that takes her to a beautiful New England town where she meets Ian, a young man who helps with her search. As the clues lead to her father’s identity and Miranda discovers the possibility of love in Ian … she faces a terrible decision… Should she share the truth and risk losing the family she has just found, or leave and keep the secret forever?” This movie airs Thursday Dec. 28 at 3 p.m. Eastern on Hallmark Movie & Mysteries. You can also watch it on Amazon.

Engaging Father Christmas‘ synopsis reads: “It’s Christmas and Miranda leaves Seattle with a suitcase full of presents to join her long-lost family… Last Christmas, Miranda fell in love with Ian, a local man who helped her as she searched for her father… Miranda agrees to keep (her dad’s identity) a secret to protect the family from scandal. This Christmas … Miranda receives an anonymous text from someone who threatens to expose her identity.” Part 2 airs on Hallmark Movies & Mysteries, on Thursday Dec. 21 at 1 a.m. Eastern, Friday Dec. 22 at 9 a.m., Sunday Dec. 24 at 6:30 a.m., and Thursday Dec. 28 at 5 p.m.

This is a beloved two-part Hallmark Movies & Mysteries series based on a bestselling novel by Karen Kingsbury. It stars Wyatt Nash, Katie Findlay, Faith Ford, and Ted McGinley. The synopsis for Part 1 reads: “Molly and Ryan share a profound friendship their first semester in college. At their favorite bookstore and coffee shop, The Bridge, they spend countless hours studying and inspiring the other to dream. But can Molly and Ryan’s unspoken love survive the expectations of others as to what their lives should ultimately be?” Part 2 takes place seven years later and aired one year later on Hallmark. Unfortunately, neither of these movies are currently airing on Hallmark Movies & Mysteries. But you can watch both on Amazon.

This delightful movie, Maggie’s Christmas Miracle, stars Jill Wagner and Luke Macfarlane. Here’s the synopsis for the movie from Hallmark: “Megan spent one unforgettable summer with a boy when they were teens and she’s never forgotten his magical definition of love. Now a high-powered attorney in New York and a single mother, her young son unexpectedly connects them again.” (Don’t want to wait? Read the book it’s based on.) If you’re looking for a sweet Christmas movie that will really pull on your heartstrings, this one is it. The characters have a genuine chemistry, but the heartache they’ve been dealt with in their past is keeping them from finding love with each other. Wagner and Macfarlane do a great job of portraying authentic emotions that truly capture what their characters are struggling with, and you’re really rooting for the two of them to end up together. The movie next airs on Hallmark Movies & Mysteries on Friday, Dec. 22 at 7 p.m. Eastern, Sunday Dec. 24 at 2 p.m., Tuesday Dec. 26 at 7 p.m., Wed. Dec. 27 at 9 a.m., Friday Dec. 29 at 5 p.m., and Saturday Dec. 30 at 11 a.m.

A Bramble House Christmas stars David Haydn-Jones and Teryl Rothery. According to the synopsis: “Shortly before Christmas, single mother and healthcare worker Willa Fairchild learns that she is a beneficiary in a recent patient’s will. Moved by the sacrifices Willa made to give her son Scout a second chance at life, Greg Conrad wanted his nurse to have her own opportunity for a fresh start. In addition to a cash bequest equal to the family’s medical bills, Greg arranged for Willa and Scout to experience the magic of Christmas at the Victorian-era Bramble House in Bramble, Oregon…” We chose this as a top movie because it features a delightful small town that truly captures the spirit of Christmas, a lot of fun Christmas activities, and an engaging plot that leaves you rooting for the characters. (Well, everyone except one character — you’ll know who we’re talking about when you see the movie.) The movie next airs on Hallmark Movies & Mysteries on Dec. 23 at  7 p.m., Dec. 24 at 11 a.m., Dec. 26 at 3 a.m., and Dec. 31 at 1 p.m. It’s based on a book by C.J. Carmichael.

5. Journey Back to Christmas

Starring Candace Cameron Bure, Journey Back to Christmas may be one of the most unique Hallmark Christmas movies you’ll see this year. It’s also one of the most heartwarming. The synopsis reads: “WWII has ended and Hanna is still grieving over her husband’s disappearance. When the Christmas Comet appears for the first time in 70 years, Hanna is caught in a terrible storm and knocked unconscious. When she wakes up, she’s in 2016. A handsome policeman comes to her rescue and offers to let her stay at his family’s farmhouse.” This movie aired last year on The Hallmark Channel, but now encores are airing on Hallmark Movies & Mysteries. You can catch it Tuesday Dec. 26 at 9 p.m. Eastern or Friday Dec. 29 at 11 p.m. Or catch it on Amazon.

This beautifully filmed movie, A Nutcracker Christmas, stars one of my favorites, Amy Acker, with Sacha Radetsky and Sophia Lucia. The synopsis reads: “When her niece is cast in The Philadelphia Ballet’s production of the Nutcracker, a jaded ex-ballerina is forced to come to terms with the life and love she left behind.” This movie features some beautiful ballet scenes and it really has a lot of heart, keeping you interested in seeing just what will happen next. If you love ballet, you’ll love this movie. It next airs on Hallmark Movies & Mysteries Saturday Dec. 23 at 1 p.m. Eastern and Sunday Dec. 31 at 11 a.m. Or watch it on Amazon.

This touching movie stars Sean Faris and Elios Mumford. The synopsis reads: “Maggie Conway’s had it with big-city living, especially after her husband-to-be leaves her at the altar – literally! She moves to small-town Washington State, opens a toy store dedicated to expanding kids’ imaginations … and meets Mark Nagle, proprietor of the local coffee shop. Mark’s number one priority is his six-year-old niece, Holly, whose mother has passed away, leaving him caregiver-in-chief along with her two other uncles. Holly hasn’t spoken a word since her mother died, and the three men try relentlessly to get her to speak. Is there room in Maggie and Mark’s busy lives for romance?”

This movie has a different twist than some Hallmark specials and it has some truly heartwarming moments. Originally a Hallmark Channel movie, it next airs on Hallmark Movies & Mysteries on Thursday Dec. 21 at 3 a.m. Eastern and Thursday Dec. 28 at 11 a.m.

8. Debbie Macomber’s Dashing Through the Snow

This is one of those lovely Christmas movies that follows the plot of two people getting stranded at an airport and now needing to travel by car together to their destinations. (If it sounds familiar, Hallmark Channel aired a movie with a similar plot, A Christmas Detour, in 2015 starring Candace Cameron Bure. That movie was delightful too.) But Dashing through the Snow has more intrigue to it. Ashley and Dash must take a car trip together after Ashley’s loses her plane reservation. “As the pair heads north, their adventures include car trouble, adopting a puppy and being secretly tailed by federal agents, who believe Ashley is up to no good. With a hint of romance gradually filling the air will these two fall in love or will their journey bring about an unexpected road bump to romance?” You can catch it on Hallmark Movies & Mysteries on Tuesday Dec. 26 at 3 a.m. Eastern, Wed. Dec. 27 at 9 p.m., Thursday Dec. 28 at 9 a.m., or Sunday Dec. 31 at 1 p.m. This is based on a New York Times bestselling book.

Finding Christmas is one of those delightful “Christmas swap” stories that became so popular after Cameron Diaz and Kate Winslett starred in The Holiday. This version stars Tricia Helfer (Battlestar Galactica‘s Six), J.T. Hodges, Mark Lutz, and Cristina Rosato. The movie is about two people who swap homes for Christmas and find their perfect matches in their new cities. Sure, maybe it’s predictable, but it’s also lighthearted and fun. This movie next airs on Hallmark Movies & Mysteries on: Saturday, Dec. 23 at 7 p.m. Eastern, Wednesday Dec. 27 at 5 a.m., Friday Dec. 29 at 1 a.m., and Saturday Dec. 30 at 1 p.m.

10. A Song For Christmas

Last but not least, we recommend A Song for Christmas. This was one of the first movies released for Christmas. It’s a story of a pop star and a struggling family who find the true meaning of the season together. The movie stars Kevin McGarry and Becca Tobin. The movie next airs Monday Dec. 25 at  7 p.m., Saturday Dec. 30 at 5 p.m., and Sunday Dec. 31 at 5 a.m.

Have any other movies to suggest? Let us know in the comments below. 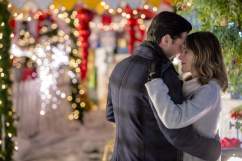