Dolores O’Riordan, the lead singer of popular 90s group The Cranberries, has died. According to her rep, her death was sudden, but further details of what caused her tragic passing have not been made available. TMZ reported that O’Riordan was in London “for a recording session” with the rest of the band at the time of her death.

“Officers were called at 9:05 a.m. on Monday, January 15, at a hotel in Park Lane. A woman in her mid-40s was pronounced dead at the scene. At this early stage, the death is being treated as unexplained and inquiries continue,” the Scotland Yard told People Magazine.

O’Riordan was just 46 years old. She is survived by her three children, Taylor Baxter, 20, Molly Leigh, 16, and Dakota Rain, 12. O’Riordan was also a step-mum to her ex-husband’s son, Donny, from a previous marriage.

Although O’Riordan struggled with depression for most of her life, she always spoke so highly about her children, and she loved being a mom.

“The best time in my life was the years spent at home with my family,” she told the Irish News in May 2017. “I love being a mum. My kids don’t see me as a famous person, or have any kind of expectation; I’m just their mum.”

O’Riordan married her now-ex-husband Don Burton in 1994. O’Riordan met Burton, who worked as a tour manager for Duran Duran, while on tour in the 90s.

The couple exchanged vows at Holycross Abbey, Tipperary, and celebrated at a reception held at Aherlow House Hotel, according to the Irish Mirror.

For several years, the family lived on a huge farm in Kilmallock, in south Co Limerick, in Ireland. They moved to Canada when their children were a bit older.

Years later, O’Riordan moved back to Ireland, but her children lived with their father (Burton) in Canada after the two decided to separate.

“They just know that mommy isn’t well at the moment,” her mother Eileen O’Riordan told the Irish Mirror in 2014, acknowledging that her daughter was having a hard time following her split from Burton.

2. O’Riordan Said That Having a Baby Helped Her Through Depression

O’Riordan and Burton welcomed their first child, a son they named Taylor, on November 23, 1997. But before Taylor was born, O’Riordan suffered from severe depression. She previously said that getting pregnant and having a baby pulled her out of that dark time.

“The first time I felt the baby in my stomach I was so moved, it was such a beautiful feeling, that I sat down and wrote a song,” O’Riordan recalled during an interview with The Telegraph in 1999. The song that she wrote, “Dying in the Sun,” was featured on Bury The Hatchett, an album released by The Cranberries in 1999.

“Do you remember/The things we used to say?/I feel so nervous/When I think of yesterday./How could I let things/Get to me so bad?/How did I let things get to me?” read the song’s lyrics.

“I’ve just moved on. Having a baby does that. No matter what happens in my day, I think of him and I smile,” O’Riordan said.

On January 27, 2001, O’Riordan and Burton welcomed their daughter, Molly, and on April 10, 2005, the couple welcomed their third child, a daughter they named Dakota.

According to her Facebook page, Dakota is an equestrian, clearly taking after her dad.

“Don, who’s a Canadian, loved horses. So being around the animals and enjoying the farm was an amazing experience. Then we decided to move to Canada to be nearer family. It’s a beautiful country with a lot to offer. We lived in a log cabin, surrounded by bears, wolves and all that great outdoor stuff,” O’Riordan told the Irish News in May 2017.

4. Burton Has a Son From a Previous Marriage

Burton was previously married to Manon Sprong. The couple had a son named Donny. At one point, Donny was living with his dad and O’Riordan at their home in Big Bald Lake, near Buckhorn, in Canada.

It was 2009, according to the Petersborough Examiner, when the family of six lived together.

While it’s unclear where Donny Burton lives today, it is presumed that he is still in Canada, as his mom resides in Toronto, Ontario. Judging by photos on his Facebook page, he enjoys hockey (he’s a Toronto Maple Leafs fan), music, and traveling.

O’Riordan and Burton were taken to court by their son Taylor’s nanny, Joy Fahy, in 2004.

Fahy sued the couple, “for breach of contract and false imprisonment, claiming she was held at their isolated Canadian home, where she says she finally barricaded herself in a bedroom when they allegedly threatened to keep her passport after a ferocious row,” according to The Telegraph.

According to the Irish Times, Mr Justice Quirke “found in favor of the Burtons.” He described O’Riordan and Burton as “exemplary and caring” parents, leaving Fahy with over $300,000 in legal bills. 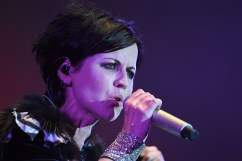