Quad Webb-Lunceford has been very vocal about the issues in her marriage this season on Married to Medicine. She and Dr. Gregory Lunceford, aka Dr. G, have had their ups and downs on the show, but there are no reports that say the couple are getting a divorce. However, Straight From the Tea has stated that the couple has separated. Even so, Quad told The Grio that she doesn’t rule out divorce in the future. She has said that she wants to have a child, but she is reluctant to do so because she and her husband are not currently on the same page when it comes to the state of their marriage. Quad says that she and her husband have major problems to work out before she can even think about bringing a child into the mix. Quad told The Grio that:

I desperately would love one day to have at least one child. Max being two. But it would be unfair for me to bring a child into this world in a household where we’re not seeing eye to eye … I want my child to be emotionally stable and have the best outlook on love and marriage. Right now, my husband and I have to really work out some things before we can even consider that.

On an episode of Married to Medicine, Quad told Bravo that she feels her husband is disconnected “from what a marriage should look like.” Dr. G’s response was that he pays the bills in order to show his love and appreciation, as reported by Entertainment Tonight.

Quad also said that, though it is not currently on the table, divorce is not out of the question. She confessed to The Grio:

I’m definitely not gonna be a person who is unhappy. Divorce is very tough, but there’s nothing that’s more important to me than my happiness. I really don’t think there is anything in this world that would make me sacrifice my happiness. Not a job, not a friendship, not a marriage. It’s just unfair. Life is very short-lived and it should be filled with love, joy and happiness. Not stress and anguish and misery.

But, what is the problem with Quad’s marriage? In an interview with The Grio, she admitted:

I think that he feels that he married me and that’s all he has to do. I think a lot of women are finding themselves in my shoes. I would really like to see more of a partnership in my marriage and I’m working with my husband in hopes that he’ll get it. It has been very challenging.

On Married to Medicine, Quad has said that she feels second to Dr. G’s job and that he has said that marriage counseling has not worked out for the two of them. Quad also stated that she does not feel emotionally supported and that Dr. G is too focused on monetary support, rather than love. And though the two have not filed for divorce, it looks like their marriage needs major help. Hopefully, the couple is able to keep it together and they don’t end up calling it quits like co-stars Simone and Cecil Whitmore, whose divorce was just announced, according to BET. 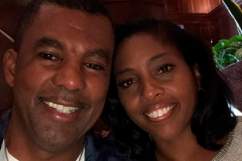