Now that McDonald’s famous Szechuan Sauce is being released across the United States, one big question still remains. Can you get the sauce in the UK or in Canada, or in other places outside the U.S.? Unfortunately, the answer is “no.” This particular Szechuan sauce limited release is happening only in the United States.

McDonald’s happily announced today that 20 million Szechuan sauce cups are now available nationwide. (Not every store, however, actually has the sauce today.) Astute Rick and Morty fans noticed that every announcement about the sauce conspicuously talked only about the United States and nowhere else. This left some people concerned.

FINALLY get the sauce!? Celebrate w/ some Buttermilk Crispy Tenders (or other qual. purch.), a cup of Szechuan, and The Sauce: a podcast about the surreal, true Szechuan story. Listen now at https://t.co/Gcrq5kM71E pic.twitter.com/rHnvwEdQ71

Unfortunately, this wasn’t by accident. The Szechuan sauce is only available in the U.S. right now, and not internationally. Not even in next-door Canada. To make sure, one big fan, @FXDRapeau, reached out to the official McDonald’s Canada Twitter account, and they confirmed the unhappy news. McDonald’s Canada wrote: “Hey there! For now, this dimensions’ version of Canada, unfortunately, won’t be receiving the Szechuan Sauce. That said, if you can crack inter-dimensional travel, please let us know!”

Hey there! For now, this dimension's version of Canada, unfortunately, won't be receiving Szechuan Sauce. That said, if you can crack inter-dimensional travel, please let us know!

Another fan asked a few days ago specifically about the UK, and got the same answer. McDonald’s official UK account responded: “Hey, sorry to disappoint but it’s only available in the US. Rest assured I shall pass your suggestion onto the sauce lords though!”

Hey, sorry to dissapoint but it's only available in the US. Rest assured I shall pass your suggestion onto the sauce lords though! ?

At least this time we know ahead of time and no one will be extra disappointed. The U.S.-limited-time release in October was insane. When McDonald’s briefly brought the sauce back on October 7, the gesture of goodwill backfired. They only had about 20 packets of sauce per participating location, and people who waited in line for hours for the treasured sauce were devastated (and really angry) when the stores ran out so fast. At UFC, for example, the line for the Szechuan Sauce was unbelievably long. Thirty minutes after this was posted, the store ran out, according to one person on Twitter:

Meanwhile, the line at a store in Atlanta was so long, with more than 200 people, that they ended up giving away the sauce lottery style for the first 100 in line, Redditor platinumbinder shared. The store only had 16 sauce packets to give away. At the Wellington McDonald’s, fans were so angry that the cops had to show up:

Cops are at Wellington McDonalds where tons of angry people lined up for hrs for Rick and Morty Szechuan sauce only to learn they had none pic.twitter.com/3T272osid4

The whole October event was so crazy and the bad press for McDonald’s got so severe that the chain apologized and promised to bring the sauce back sometime this winter. Their tweet on October 8 read: “Szechuan Sauce is coming back once again this winter. And instead of being one-day-only and limited to select restaurants, we’re bringing more — a lot more — so that any fan who’s willing to do whatever it takes for Szechuan Sauce will only have to ask for it at a nearby McDonald’s.” And now they’re finally bringing it back — but only in the United States. (If you really want to try the sauce, give this copycat recipe a shot.) 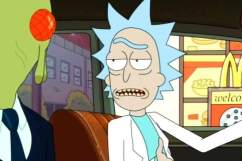