Tonight is the finale episode of The Bachelor Winter Games and it will be followed up by a tell-all reunion show that may be full of even more drama than the finale. Now, before we get into all the spoilers on what to expect tonight, this is your warning. So, if you do NOT want to know any spoilers about who ends up with who, which couples break up, who’s engaged, etc., STOP READING NOW.

Now let’s get into all the details. The official ABC description of the finale episode reads, “Five couples remain in the winter games, but only one dynamic duo will come out on top, and the stakes are higher than ever as the daunting task of ice dancing lies ahead … When the time comes to practice their moves on the ice, everyone is in awe when host Chris Harrison introduces figure skating legends Nancy Kerrigan, Tai Babilonia and Randy Gardner as their judges … To help ease the ice dancing stress, Chris Harrison has one more surprise that adds a different kind of tension for everyone – Fantasy Suite Dates – where each couple is given the chance to spend the night alone to decide if their relationship is strong enough to last beyond Vermont. One bachelor tells his significant other that he is falling in love, while another bachelorette must make a major personal decision to determine if she’s ready to take the next step with her man.”

And, when it comes to the tell-all episode, ABC writes, “Following “The Bachelor Winter Games” finale, the special will reunite the bachelors and bachelorettes from around the world who participated in the winter-themed iteration of the hit romance reality franchise.” Short and sweet without much info for the tell-all, but don’t worry. We’ve got wayyyyy more details than that. Read on below for spoilers on what to expect tonight.

Early on, Jordan speaks with Bibiana and ultimately decides that their relationship isn’t meant to be. This leaves the remaining four couples as Ashley I. with Kevin, Luke with Stassi, Courtney with Lily, and Dean with Lesley, as we see in photos released by ABC. According to Reality Steve, the final competition, which is ice dancing, has some high-profile judges and the winners are ultimately Kevin and Ashley I., though Stassi and Luke arguably did equally as well. Reality Steve reported that, “Consensus is that Luke and Stassi had the best routine, but Kevin and Ashley were declared the winners because, well, this show was never in a million years going to declare Luke and Stassi the first ever Winter Games couple when they knew that Luke isn’t nearly as popular in the franchise and he wasn’t there for Stassi.” So, Ashley I. and Kevin are the winners of the first ever Bachelor Winter Games.

According to Reality Steve, the contestants who appear for the reunion episode are Courtney, Lily, Eric, Christian, Jordan, Josiah, Rebecca, Ally, Ben, Bibiana, Clare, Benoit, Dean, Lesley, Kevin, Ashley, Stassi, and Luke. Courtney and Lily are still together, as are Dean and Lesley. And, during a promo clip, viewers can see Dean down on one knee, but that’s just to give Lesley a key to his place, so don’t get too excited. Recently, Ben Higgins spoke with E! News about the couples he thinks are in it for the long haul and he said that, “I think Courtney and Lily are just perfect for each other. And I don’t want to give up on Lesley and Dean, there’s a lot there. I think they have this relationship that’s very real and there’s a lot of love that’s deep down. I think they’re going to butt heads a lot, but I think they really love each other.”

Drama between Luke Pell and Stassi is major, as Reality Steve has reported that, “She said Luke ghosted her after taping … Probably because he was seeing Holly Allen right before he left and has been with her since he got back … He says that he messaged her 3 times on Instagram but she never responded but never got her number. Stassi was apparently not very happy after their interview … Luke shows his true colors.” Ouch.

As for Kevin and Ashley I., Reality Steve previously reported that Ashley loses her virginity to Kevin, but it apparently happened after the show stopped filming, so the couple makes sure to shoot down sex rumors from the overnight dates. The two are still together, but Reality Steve said Kevin is not on the show for “the right reasons.”

Fortunately, there is a majorly happy ending for fan-favorite Clare Crawley, that features a proposal and you can see the ring below. Reality Steve has stated that, “Basically, after the show ended filming, Benoit texted Clare to see how she was doing, they reconnected at that point, and they’ve been together ever since. For those that are unaware, filming ended about a week before Christmas. So they’ve been together a couple months now. Benoit proposes to Clare and she says yes.” 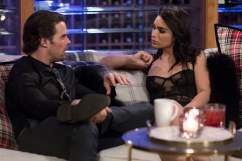 Read More
Reality TV, The Bachelor, TV
Tonight is the finale episode of The Bachelor Winter Games, along with a tell-all show. Get all the spoilers on the winners and who ends up with who.