Crown Media Here's where My Secret Valentine was filmed.

Tonight Hallmark is premiering its first in a series of Countdown to Valentine’s movies, My Secret Valentine. In this movie, a young woman, Chloe, is trying to keep her family’s prized winery when Seth shows up to help. The scenes in this movie are beautiful and the scenery is lush green and just so pleasing to the eye. But can you visit the winery where this is filmed in real life and, more importantly, sample some of the wine?

Yes, actually, you can visit the filming location. In fact, there are two wineries where the movie was filmed. You can even buy one of them if you want. Portions of My Secret Valentine were filmed at By Chadsey’s Cairns Winery in Prince Edward County, according to TV Goodness. And it’s currently for sale. The winery is on a 141-acre heritage farm overlooking Lake Ontario, dating back to 1809. The winery is for sale because the owner, Richard, is ready to retire at 69. According to their website: “We are looking for a wine lover with a romantic spirit and resources to guide this glorious farm into the future.” Here’s a look at beautiful Chadsey’s:

The area is a small wine-making county, Walker explained to My Devotional Thoughts. It opened its first winery in 2004, and now there are about 40 wineries in the area. “Just a beautiful county. So we shot there, and that was a lot of fun. The weather was pretty decent. It was the beginning of November,” he said.

After shooting in Prince Edward County, they drove five hours north and starting on day four, they were filming in North Bay. The weather wasn’t as nice on those days, Walker said. “Day four of shooting in North Bay, the weather dropped to minus fifteen. It was a random huge swing in the weather.” He said they had a picnic scene when it was -15 degrees, along with a scene where they were walking and talking about what they do. They had to wear just light jackets and it wasn’t easy. He said that he’s used to the cold, but he ended up complaining about that a lot more than Lacey Chabert. He said they had a heated tent to thaw out between scenes, and they ended up filming a scene in a truck rather than outside in a field because of the cold.  Walker added that Chabert worked really hard during the movie. She was nursing too, so she’d be up all night, work all day, and then go over lines at the end of the day. She was a supermom, he commented. You can read more about how the movie was made in his in-depth interview with My Devotional Thoughts here.

Here’s Hallmark’s description for the movie: “A young woman takes advice from the chalkboard notes that her mysterious house rental tenant leaves when a slick sales rep arrives with plans to buy her family’s prized winery.” This sounds really good. I’m betting that if you liked Autumn in the Vineyard or Summer in the Vineyard, then you’ll also like this winery-themed movie.

Another recap reads: “Chloe is upset her dad might sell their winery and “stress snacks” with a cute guy who turns out to be Seth, the wine rep. They spar until she goes to the cabin, rundown since her mom died. There she finds a note offering help from ‘Handyman’ and she thanks him, signing ‘In Need of Repairs’. Meanwhile, Seth tries to win her over, but it’’s Handyman she’’s crushing on.”

Will you be visiting the wineries where this Hallmark movie was filmed? 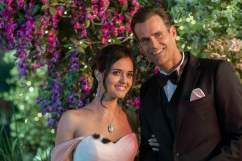 Hallmark’s Countdown to Valentine’s Schedule 2018: How to Watch All Five New February Movies

Read More
Hallmark, TV, Valentines Day
My Secret Valentine takes place in a gorgeous winery, but can you visit the location in real life? Here’s where you can see those stunning views for yourself.