The Mega Millions drawing for Tuesday, March 27, 2018, is for an estimated $458 million. But has anyone won yet? Once again, no one has won tonight’s Mega Millions jackpot, so the jackpot is now going to increase to $502 million for Friday night, March 30. Today’s jackpot may not be the largest jackpot in Mega Millions’ history, but it’s getting close: tonight’s jackpot was the fourth largest in Mega Millions history. Whenever someone wins the main jackpot, the Mega Millions website updates to show that the jackpot is starting over at $40 million. Since no one won tonight, the website updated to show an increased jackpot. It typically takes Mega Millions about two hours to process all the tickets and announce if someone won. The winning numbers for tonight were 7 – 25 – 43 – 56 – 59  and a Mega Ball of 13 (with a Megaplier of 13.) W

Since Mega Millions changed the jackpot rules in October 2017, we can expect a better chance that the jackpots will get bigger and bigger and break more records over time. The largest jackpots in history were: #1) $656 million in March 2012; #2.) $648 million in December 2013; #3.) $536 million in July 2016; and #4.) $451 million in January 2018. This means that Friday’s jackpot will still rank as the fourth-highest in history, just shy of surpassing the third-biggest Mega Millions jackpot.

When someone eventually does win the jackpot on a future drawing, it could still take a while before we find out their identity (if ever.) Some states allow a few weeks to claim a prize and other states allow winners to take up to a year to claim them. Beyond that, some states even allow winners to stay anonymous. And as for the ones who don’t — well, those rules might be changing soon, thanks to a recent Powerball jackpot winner in New Hampshire. Although New Hampshire rules allow people who win games like Powerball to take up to a one year from the draw date to claim their prize, New Hampshire law also requires the winner’s name, town, and amount won be available for public information. The winner was able to file a lawsuit and stay anonymous while claiming the winnings through an anonymous trust even though they had originally signed their winning ticket with their name. 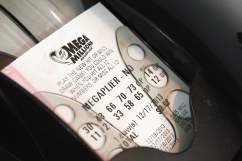