Last night, Arie Luyendyk made Bachelor history with a major turn of events, but before we get into the details of that, THIS IS YOUR SPOILER WARNING. Now let’s get into Luyendyk and show runner-up Lauren Burnham’s future. On last night’s finale, Luyendyk told the cameras that, “I go to bed and I think about Lauren, I wake up and think about Lauren.” Burnham was all Luyendyk could apparently think about, so he decided to end his engagement to season 22 winner Becca Kufrin in order to pursue a chance to get back together with Burnham.

Prior to proposing to Kufrin, Luyendyk had to let down Burnham, which is what he later called a mistake. When Burnham’s car drove away from Luyendyk, through tears, she talked to the cameras about her feelings on Luyendyk letting her go. Luyendyk had told her that he didn’t make his proposal decision until that very morning. Burnham’s response in the car was, “How could he get down on one knee if he wasn’t sure ’til like 3 hours ago?” She also said she felt his rejecting her was a mistake and that she still loved him. But, Luyendyk went on to be with Kufrin. But, he reportedly connected with Burnham after filming as well.

Just under two months after getting engaged, Luyendyk pulled the trigger with the break up and Reality Steve reported that he then headed to Virginia to see Burnham. He reportedly begged her to take him back and she accepted. At the time, Reality Steve stated, “ABC’s vans were out in front of Lauren’s mother’s house in Virginia, and the person who posted the picture seemed to know that ABC and Arie were there and were filming.”

*Bachelor Spoiler* Arie ended his engagement with Becca, Final Rose, a little over a week ago and is now dating Lauren B., the runner up. That’s why he was in Virginia last week filming at Lauren’s parents house. Courtesy of @RealitySteve #Bachelor #BachelorNation pic.twitter.com/B91Ufmgxl2

When it comes to the possibility of Luyendyk getting engaged to Burnham or proposing on the After the Final Rose special, the chances were slim, but Luyendyk did get down on one knee. He also revealed that he and Burnham are moving in together in Arizona.

Prior to the news breaking that Luyendyk had dumped the winner this season, Reality Steve reported that, “He’s not marrying anyone from this show. That’s not why he did it. His reputation precedes him. I don’t think all the sudden he’s changed because of this. In fact, I pretty much know it. But hey, what do I know, right?” Reality Steve later said, “Of ALL the people to change their mind on an engagement after two months, it’s the guy who just happens to be a known womanizer, a known cheater … and just proved everything that what was said about him was true.” Luyendyk has a reputation as a ladies man. Even his mother warned Kufrin that there are always women around because of his racing career. And, his flip-flopping finale doesn’t help his case.

Luyendyk also was reported as direct messaging and communicating with some of the other women from the show after filming wrapped, which is not a good look. Bekah Martinez was one of the women to put him on blast after the finale. Blogger Reality Steve said this is yet another reason why he doesn’t think Luyendyk is in it for the long haul with Burnham either. Reality Steve explained that, “This is nothing against Lauren, but do you honestly think this is the girl he’s going to spend the rest of his life with? This is finally the one he found? Oh sure, in his mind it is. For a few months. Then it’ll be the next new shiny toy that comes rolling into town. Or his DM.”

According to Us Weekly, Burnham did not watch the finale episode last night, but she is set to appear on the After the Final Rose special. 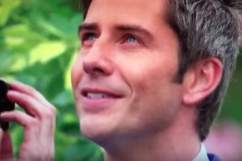 ‘The Bachelor’ 2018 Winner: Who Wins & Ends Up With Arie Luyendyk Jr

Read More
Reality TV, The Bachelor, TV
It's the After the Final Rose show for The Bachelor 2018. Fans want to know if Arie Luyendyk is engaged or if he proposed to Lauren Burnham on the show.