The long-running reality competition series Dancing With the Stars returns for its 26th season, with an all-athlete edition. Some of the fan-favorite pros are back as well. Get to know all the details on what time the show airs, what channel to watch, cast info and what to expect this season below.

“DANCING WITH THE STARS: ATHLETES” PREMIERE TIME & SCHEDULE: DWTS premieres on April 30, 2018. The show will air in a limited four-week run, Monday nights at 8 – 10 p.m. ET/PT. The season 26 finale will air on May 21, 2018, which is the same night as the American Idol finale and the 2018 Miss USA Pageant. When it comes to other shows that are ending on the ABC network, a couple that are airing around the same time as the DWTS finale include the series finale of Once Upon a Time, which is airing May 18, 2018, and The Middle, which ends on May 22, 2018.

“DANCING WITH THE STARS” 2018 TV CHANNEL: The show is a staple on the ABC Network and American Idol has given up its Monday night time slot to make way for the new DWTS schedule. Here is the ABC channel finder, to help you locate your local station.

HOW TO WATCH “DANCING WITH THE STARS” ONLINE: There are several options for watching the 2018 season of Dancing With the Stars. Find the free and easy options, along with live streaming instructions here.

DWTS 2018 JUDGES: Fan-favorite judges Carrie Ann Inaba, Bruno Tonioli and Len Goodman have all returned to the judges’ table for the new season. In recent months, Inaba has subbed in for Kelly Ripa on Live! With Kelly and Ryan, when needed, and she had dished a little on the new season, prior to the big cast reveal that went down on Good Morning America, in early April 2018.

“DANCING WITH THE STARS” SEASON 26 HOSTS: Tom Bergeron and Erin Andrews have both returned as the show’s co-hosts, though only Bergeron was present for the big cast reveal on GMA.

“DANCING WITH THE STARS: ATHLETES” CAST OF CONTESTANTS: The contestants range from figure skaters, to snowboarders, to retired champions. Adam Rippon is paired with pro Jenna Johnson, Arike Ogunbowale is dancing with pro Gleb Savchenko, Chris Mazdzer has teamed up with pro dancer Witney Carson, Jamie Anderson and Artem Chigvintsev have been matched up, Jennie Finch Daigle hits the ballroom with pro Keo Motsepe, Johnny Damon and Emma Slater are dancing together, Josh Norman is performing with pro Sharna Burgess, Kareem Abdul-Jabbar is with pro Lindsay Arnold, Mirai Nagasu and pro Alan Bersten are a team, and Tonya Harding is dancing with pro Sasha Farber.

DWTS 2018 PREMIERE SYNOPSIS: The official ABC synopsis states that, “This season’s lineup of athletes includes Olympic figure skaters, a former Los Angeles Lakers superstar, an NFL cornerback and a former World Series-winning Major League Baseball player, among others – all vying to win the coveted Mirrorball trophy. During their journey on the show, each one of them will reveal aspects of their lives and personalities off of their respective playing fields to uncover their true selves, their passions and what drives them to compete. Each couple will perform a cha cha, salsa, foxtrot or Viennese Waltz. At the end of the night, there will be eliminations based on judges’ scores and live viewer votes cast during the show’s live broadcast in the ET/CT time zones.” 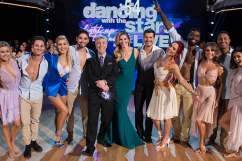 ‘Dancing With the Stars: Athletes’ 2018 Cast of Contestants

Read More
Dancing With The Stars, DWTS, Reality TV, TV
Tonight is the 2018 premiere of Dancing With the Stars: Athletes. Get the rundown on what channel to watch, DWTS' time slot and TV schedule.