Since the release of her smash single “Bodak Yellow” in 2017, Cardi B has become one of the biggest celebrities on the planet. Her recognizable rap flow and popular songs with the likes of 21 Savage, G-Eazy, and Migos have earned her a place in hip-hop’s upper echelon, while her social media presence and tenure on the reality show Love & Hip-Hop has allowed to crossover into the mainstream like few rappers before her. But she isn’t the only one in her family with plans to make it big.

Cardi’s younger sister, Hennessy Carolina, has also been making waves in the entertainment industry as of late. While she differs from her sister in terms of rap music, Hennessy has amassed a huge social media following of her own, and has earned praise for her eclectic fashion style.

As the popularity of both sisters continue to rise, here’s what you need to know about Hennessy Carolina:

1. Her Parents Named Her After the Alcohol

I’m hosting TRL LIVE TODAY on MTV at 4pm and my sister @iamcardib is the guest! Tune in guys? is a #PARTYWITHCARDI SPECIAL

According to Cosmopolitan, Hennessy Carolina Almanzar was named after the alcoholic beverage Hennessy. The story goes that her father was drunk when he showed up the hospital where she was born, and he insisted that she be named after his favorite drink. The notoriety of this story has led to speculation that Cardi B’s birth name was Bacardi, to match her sisters’s alcoholic moniker, but it is actually Belcalis. Their parents simply nicknamed the future rapper “Bacardi” as a tribute to her Trinidadian/Dominican heritage.

In a 2017 cover story with BET, Hennessy recounts what it was like growing up in a big family and why she felt being the youngest made her the most outgoing. “I was always in dance and performing arts school,” she said, “All of my schools were performing arts. I’m the one that, like, turns up the whole party. Actually my family is very [turnt], all of them are either funny or outgoing. But I think I’m the most.”

#ThrowBackHenny… Summer time I’ll bring my curls back ?? been trying to get em back for 5 years! The heat not letting me ? growing up i felt different because they’re wasn’t too much girls with my hair, then as I got older felt a little too different and odd so when I found out about the flat iron… Oh hell broke loose…. but 5 years ago I realized my curls were different and special. the reason why you guys didn’t see me and had my page private for 2 years was because I wanted to come out with healthy hair but I ruined it again when I started hitting the road… under my wigs I put a lot of oils and hair drops and hair mask to revive my hair… i constantly cut my hair but it doesn’t work if you keep applying heat… so no more heat … for the 100th billion time lmao. One of my biggest inspirations and tips that help me though my healthy hair journey was from #curls #curlyhair #HealthyHairJourney I feel like My Hair matches my personality.. FUN AND WILDDDDD ????????

Hennessy, 22, also spoke on her fashion sensibility, which she cultivated from any early age. “I’ve been wearing heels since elementary school,” she reveals, “I don’t know how. I used to go to school in heels every day. I thought I was a little grown woman. For some reason, I don’t know why, my teachers and my principals, they always used to tell me, ‘You were meant to be on TV, you were meant for it.’ It motivated me.”

2. She Appeared On Season Three Of ‘The Challenge: Champs vs. Stars’

Hennessy made good on the expectations of her teachers when she appeared on the seventh season of Love & Hip Hop: New York alongside her sister, who was a series regular. Though her tenure on the the show was brief, she is perhaps best remembered for getting into a fight during the reunion episode in 2017.

“I got into a fight on the reunion and I regret it,” Hennessy admitted to BET, “One reason I regret it is because I’m grown and I wouldn’t want to let that represent me, so that people wouldn’t judge me based on that. But I have a good reason, it’s because the girl was being fake and she was talking crap about my sister, and I’m very defensive over my sister.”

More recently, Hennessy appeared on the third season of The Challenge: Champs vs. Stars. The series saw celebrities go head-to-head with fan-favorite winners from previous seasons in an assortment of physical tests. Hennessy spoke with Billboard about being cast in the series, and some of the fears she had returning to television. “I didn’t know anybody, so I was getting in a team with people I didn’t know,” she explained “It was hard work and it was scary. But it was good. I was like, ‘You know what? I’ll do it for charity. If it’s for charity, I’ll do it.'”

Hennessy would go on to donate her share of the proceeds to BronxWorks, an organization that provides health and social assistance to families in need. “I chose BronxWorks because I’m from The Bronx, and I got raised in The Bronx, and I just know the struggle and how it is growing up in The Bronx,” Hennessy said, “I just did it for The Bronx. … I wanted to help the kids and everyone there, because there’s not a lot of opportunities out there.”

3. She Gets Involved With Cardi B’s Public Feuds

Hennessy has long made a point of defending Cardi B in the media. Her sister received a tidal wave of backlash after she announced that she was pregnant in April, with many fans claiming that a baby will hurt her music career. Hennessy jumped to Cardi’s defense in an interview with People magazine, saying:

Why is anyone saying anything so mean to someone? A baby is a blessing. Why would you talk about it like it’s a bad thing? My sister is such a good person, I wouldn’t want nobody to talk bad about her. It really hurts. But I’m not gonna let them stress me out anymore. I’m tired of it! I know she’s happy… No more people talking about her. I know she’s happy and she’s free. She can go out and eat food, not hide what she wants to wear.

Hennessy also went after Azalea Banks after the rapper called Cardi B an “Illiterate untalented rat.” Hollywood Life reports that Hennessy posted an Instagram photo of Banks wearing a thong while walking a red carpet. Her caption read: “What was your excuse? Your intelligent a** told yourself to go out to carpet event like this?”

In an interview with Paper Magazine, Hennessy spoke on how she and her sister deal with internet trolls. “What we tell each other, is let’s not pay these haters no attention,” she reveals, “But it’s hard because we really have big hearts. We would not want to hurt nobody else, and we wouldn’t want to talk about nobody else.”

She goes on to say that “We get really sad when somebody says something mean to us because we’re really good people and we have really good hearts. It just really hurts our feelings. So we just learned to let people just talk, let them have their opinions, and not take it offensive. Don’t let that mess up our minds.”

Hennessy made headlines in 2017 when she publicly came out as a lesbian. She recounted the difficulty she had in telling her parents to Paper Magazine in April, saying “It was kind of hard because my mom is Caribbean and she didn’t really accept it at first. It was really hard because growing up people always made it seem like you have to be with a man. But God wouldn’t want people to not love each other. So why do I have to listen to what other people want?”

The up-and-coming celebrity went on to state that her parents are now in full support of what makes her happy. “They actually started accepting us, and accepting my girlfriend,” she said, “Sometimes everyone would be a little weird about it, but then they would just see like, “Oh my god, this is love,” you know? We’ve been believing this is the way things are and it’s not — that’s just rules that been put on us. But now I feel free and now I just try to spread the message as much as I possibly can. Love is love no matter what gender.”

According to In Touch Weekly, Hennessy was in a relationship with a woman named Mel as recently as September 2017. It is unclear whether the couple is still together.

On the subject of love, Hennessy told BET “Be patient, because love comes to you naturally. Once you look for it, you choose the wrong person. Everything happens naturally, people come into your life when you’re ready. When it’s meant to be, it’s destined for it to happen, so you’re going to meet The One, one day. Don’t look for it. It’ll just come.”

5. She Has Plans to Create Her Own Fashion Line

While her sister remains firmly entrenched in the rap game, Hennessy has plans to dominate the fashion industry. She revealed her plans to create her own fashion line in the BET interview, saying “Growing up, I wanted to be a fashion designer, which I’m still in school for, like that’s what I want to be; a fashion designer.”

The burgeoning fashionista didn’t hesitate to set her sights high, either, stating that her dream customer is “Every celebrity that’s on the red carpet. Everybody at the Met Gala and on top of that, just everybody and anybody. I would dress everybody.”

Hennessy’s Instagram, which currently sits at 2.7 million followers, has gone a long way in boosting her popularity. Vogue ran a profile on her Instagram in March, calling her account “An understated, mix-and-match ‘90s aesthetic” and writing that she has a “double-tap worthy style of her own.”

Hennessy is currently attending the Fashion Institute of Technology in New York City, where she is majoring in design. 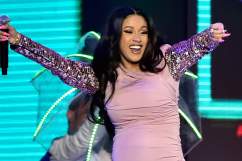 Cardi B Net Worth: 5 Fast Facts You Need to Know