Meghan Markle carried a bouquet of flowers when she walked down the aisle on May 19. As is royal tradition, Markle’s bouquet contained a sprig of myrtle, which is meant “to symbolize… love and unity,” according to Southern Living. The shrub, which was present in Kate Middleton’s bouquet, is also said to “bring luck and fidelity,” according to Marie Claire.

Myrtle tends to fit in nicely to many bridal bouquets, as it is an evergreen plant. It’s also aromatic, which helps to give any bouquet a pleasant scent. The common variety of myrtle sprouts white flowers and also features round, dark-hued berries that contain several seeds.

The tradition of including myrtle in bridal bouquets was started many moons ago when Queen Victoria’s daughter, Princess Victoria, was wed to German Emperor Frederick III in the 19th century. In the 1800s, the queen had been gifted a myrtle plant by the grandmother of her husband, Prince Albert of Saxe-Coburg and Gotha. Since that time, the sprig used in every subsequent royal wedding bouquet has been plucked from the garden.

The bouquet was rounded out with a variety of white flowers, which is also fairly customary.

Markle will likely participate in another age-old tradition among royal brides; she will leave her bouquet at the Tomb of the Unknown Warrior at Westminster Abbey. The tradition was started by the late Queen Mother, Lady Elizabeth Bowes-Lyon, who left her wedding bouquet at the grave “in memory of her brother Fergus,” who died in killed in action at the Battle of Loos.

“The tradition began in 1923 following the wedding of Lady Elizabeth Bowes-Lyon – the future Queen Elizabeth – to the Duke of York, who later became George VI. Lady Elizabeth, who became the Queen Mother in 1952, left her bouquet at the grave in memory of her brother Fergus, a young officer who was killed on the Western Front in 1915. The grave is one of the most sacred places in the Abbey and is the only part of the floor upon which the congregations are not allowed to walk,” The Telegraph reported, after Kate Middleton and Prince William’s 2011 wedding.

As far as the other flowers go, Prince Harry and Meghan Markle chose Philippa Craddock to decorate St. George’s Chapel. According to Kensington Palace, Craddock will be using flowers that naturally bloom in the month of May. You can expect to see “branches of beech, birch and hornbeam, as well as white garden roses, peonies, and foxgloves.”

“I am excited and honoured to have been chosen by Prince Harry and Ms. Meghan Markle to design and create their wedding flowers. Working with them has been an absolute pleasure. The process has been highly collaborative, free-flowing, creative and fun. The final designs will represent them as a couple, which I always aim to achieve in my work, with local sourcing, seasonality and sustainability being at the forefront,” Craddock said.

Many of the blooms will be taken from local gardens at The Crown Estate and Windsor Great Park. 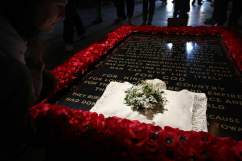 What Is the Tomb of the Unknown Warrior?