YouTube couple David Dobrick and Liza Koshy announced their separation on Tuesday morning. The couple had been together since 2015, and have gained a large following through their videos together, which includes vlogs, pranks, and internet challenges. “It wasn’t healthy for us to continue to be together – for now”, David said in the break-up video, “You never know what could happen, but just not now.”

Both David, 21, and Liza, 22, said that the pressure of their fledgling YouTube careers was a major factor in their split. “We did nothing to each other to cause a break up”, David continued, “We have a lot of growth and development and learning and loving to do.” The former couple maintain that they will remain close friends.

Here’s what you need to know about David and Liza’s split:

In an interview with Seveteen Magazine, David says that he and Liza met at a party in Hollywood. Both were rising internet stars at the time, and David says they bonded over the fact that neither of them could drink because they were underage. The Odyssey Online adds that David was initially nervous about asking Liza out on a date, and it took him four months to get up the courage to do so. They began dating in late 2015. They did not make it public until months later, however, when they posted a photo of themselves on Instagram.

The caption read: “Only we would spend a pun of money on calendars to take a pic just to tell you that yes… we are dating.” The calendars that Liza references in the photo all have the date November 28th circled, which was their anniversary.

David said that they celebrated every month in their relationship as its own anniversary. “At the seven or eight-month mark”, he revealed, “we ran into each other at the grocery store buying gifts and flowers for one another!”

In the video titled “IT’S TIME WE TELL YOU”, Liza tells the story of a cherished gift that David gave her. Liza says that they had their first kiss on a rooftop in Los Angeles, and she picked up a bunch of gravel and put it in her pocket so as not to forget the importance of the moment. Months later, however, the gravel went missing, and Liza was horrified over what she felt was an important memento. David told her not worry.

Valentine’s Day rolled around, and David gave her a card and a ring. He told her that he managed to find the gravel, and revealed that he had it ground up and placed into the center of the ring that she had just put on.

2. Both Of Them Transitioned To YouTube When Vine Was Discontinued

Both David and Liza got their start on Vine, where they built up massive online followings. David posted his first video to Vine in 2013, and eventually netted over 1.3 million followers. Liza found even greater success as a Viner, tallying up over 5 million followers before the app, was discontinued in 2016.

But really I owe you a lot vine. Thank you for being my favorite dating app pic.twitter.com/QKIts4XA36

The couple tweeted out their support for Vine, as it was the platform that allowed them to meet. “But really I owe you a lot vine”, David tweeted, “Thank you for being my favorite dating app.” Liza humorously replied, saying “we’ll send over our first born.”

David and Liza then made the transition to YouTube, where they not only maintained their popularity, but managed to expand it. Liza currently runs two YouTube channels: Liza Koshy, which has 15.4 million subscribers, and Liza Koshy Too, which has 6 million subscribers and focuses on more casual content, like Liza reacting to her old videos and her and David participating in various online challenges.

Some of these videos include the “Try Not To Cry Challenge“, where David comforted Liza as she tried to hold back tears, and ‘Couples Try Not To Laugh Challenge” (above), where they sat face-to-face and tried to make the other giggle.

Another popular video is “Our First Time”, which was made after David reached 1 million subscribers and promised that he and Liza would share an onscreen kiss. The couple even reacted to their video on David’s secondary channel.

3. Fans Wanted Them to Marry When David Was Faced With Deportation In 2017

In 2017, David announced that his place in the United States was at risk after President Donald Trump terminated the Deferred Action for Childhood Arrivals (DACA) act. DACA previously allowed illegal immigrants who were brought into the US as minors to stay in the country and work. “I paid $400,000 in taxes last year and all I got was a free trip back to Slovakia #DefendDACA,” David wrote on Twitter.

The DACA controversy forced David to turn down an invitation to attend VidCon in Melbourne, Australia, for fear that he may not have been allowed back into the United States if he left. Many of David’s YouTube friends, including Liza, shared their support on social media. “Don’t take DACA away from my DADA”, Liza tweeted.

Don't take DACA away from my DADA. #DefendDACA

The fear over whether David would be deported to Slovakia led many fans to suggest that he and Liza get married so that he could attain a green card and stay in the country. David addressed these suggestions on YouTube, saying “I mean, its too early to propose. I don’t know, I’m not into that… I wanna propose when its right guys.”

While they never seriously considered tying the knot, David and Liza have taken part in several marriages. They helped a couple get engaged outside of their apartment in the video “SURPRISE MARRIAGE PROPOSAL“, and they dropped by the wedding of former Nickelodeon actor Josh Peck in the video “LIZA’S BIG WEDDING DAY!!!”

4. They Broke Up 6 Months Prior To Their Announcement Video

In their separation video, titled “We Broke Up”, David and Liza reveal that they had actually broken up six months earlier, and were only now announcing it to the public. At the start of the video, David says that Liza cheated on her, and jokingly adds that he found seven guys in her bedroom.

David gets noticeably more solemn as the video progresses, however, and details the events that led to their split. “Liza broke up with me because she felt like we’ve been distant because we’ve been so busy,” he said. “As much as I hate to admit it, I was feeling it on my side too but I just don’t have the balls to pull the trigger on that.”

So proud of everything this girl has accomplished in so little time. Never have I ever been so impressed with such a tiny human. Congrats for being the cutest person to ever win a Teen Choice Award. Love you Liza!

Liza elaborated on the nature of their split, saying: “We felt like we were living separate lives but neither of us was coming to terms with it.” The couple stated that they have been living separate lives for some time, but they felt it was right to inform their fans. Liza said that they are still great friends, and David added that while they are not dating right now, they made up getting back together at some point in the future.

5. Fans Are Shocked Over The Split

david and liza are always gonna be remember as my favorite couple in my heart? pic.twitter.com/A2UOoXfwmQ

While there were some rumors circling as to whether David and Liza were together, the announcement of their split still caught many fans off guard. The couple became a trending hashtag on Twitter, with many users bemoaning their own chances at love if a couple as charming and seemingly perfect as David and Liza couldn’t make it.

A popular meme played off of this surprise, using the improbability of their split as a source for some much-needed comedy. Check out some of the funniest reactions below.

David and Liza were supposed to get married and have cute kids and make the best parents on Mother Earth and I wanted to see the whole of vlog squad on their wedding being the most supportive friends but pic.twitter.com/D0adImVik2

Me wondering what love is after I found out David and Liza broke up pic.twitter.com/PvBZQ4Sp2K

After watching David and liza break up pic.twitter.com/zSxIqrehvn

Nurse: sir you’ve been in a coma for 6 months
Me: oh boy I can’t wait to see what my favorite YouTube couple David and Liza are up to pic.twitter.com/sIIpi5jaSw

Everyone watching the David and Liza breakup video ? pic.twitter.com/l1SkCPhfOY

On a more serious note, David and Liza’s video split was applauded by some users, who felt it was a mature and inspiring way to deal with heartbreak. One user wrote: “The fact that David and Liza sat down, told us they broke up while still cracking jokes and supporting each other is sad yet so inspiring. they continue to love and support each other even though they’re not together anymore. That’s real love and respect. major props to them.”

Another pointed out how well they played off their chemistry for the fans.”David and Liza literally broke up 6 months ago, stayed best friends, played it off to the camera, and are still able to joke and mess around,” they wrote. “We really stan the right people. i love them so much and i hope theyre sososo happy.” Check out some of the most heartfelt reactions below.

David and Liza laughing together after breaking up is how I want all my relationships to end pic.twitter.com/97NpkdWCPB

the fact that David and Liza sat down, told us they broke up while still cracking jokes and supporting each other is sad yet so inspiring. they continue to love and support each other even though they’re not together anymore. that’s real love and respect. major props to them

david and liza literally broke up 6 months ago, stayed best friends, played it off to the camera, and are still able to joke and mess around. we really stan the right people. i love them so much and i hope theyre sososo happy

this is so real and mature. i take it back. love isn’t dead, love is real and they proved that you can still love someone by letting them have time to grow and understand themselves. i hope things work out for David and Liza bc they deserve all the happiness in the world pic.twitter.com/KSkdzRkUfu 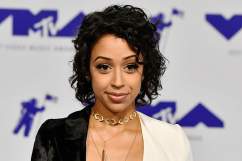