Tonight we finally get to see the sequel to the adorable movie, The Perfect Bride. Tonight’s movie, The Perfect Bride: Wedding Bells premieres on Hallmark tonight, June 9, at 9 p.m. Eastern as part of the June weddings series. Pascale Hutton and Kavan Smith reprise their roles in what promises to be another heartwarming movie. After you read all about this movie and watch it, come back and share any comments or questions that you may have about the movie in our comments section below. Here’s everything you need to know about The Perfect Bride 2. (Note: If you’re looking for details about where the movie was filmed, see our story here.)

To find out what channel Hallmark is on for you, click here to go to TV Guide’s listings. Then change the “Provider” (right under TV Listings) to your local provider. You’ll be able to scroll down to see what channel Hallmark is on for you. (To find out how to stream Hallmark’s movies live, see our story here.) If you miss the premiere, you can watch encores on June 10 at 7 p.m. Eastern, June 16 at 7 p.m., June 17 at 3 p.m., and June 23 at 3 p.m.

Hallmark’s synopsis reads: “Newly engaged Nick and Molly are looking forward to their big day. After their overbooked wedding venue reserves the wrong date, they have six weeks to plan the wedding of their dreams. Things get even more complicated when Steven, who once left Molly at the altar, comes back into her life with a business offer that may be too good to turn down.”

Hallmark has another synopsis which reads: “Former marriage counselor turned trainer Molly offers yoga and advice to couples in her “Bridal and Marriage Boot Camps,” (and it becomes) so popular she wants to buy her own gym. Her boyfriend Nick is in the same happy boat. He’’s the wedding photographer everyone wants, but now he’’s going to pursue art photography. Both Molly and Nick are taking big steps and they’’re about to take another huge step together by getting married. Though they’’re clearly perfect for one another, each is afraid of repeating past mistakes by seeking perfection but luckily, they remember that nothing really matters except their perfect love.”

Interestingly, it was Smith and Hutton who came up with the idea for the sequel. Smith told International Business Times that they enjoyed filming the first movie so much that they went to Hallmark to ask about making a sequel. And the executives told them absolutely, because the fans loved their first movie so much. A third movie hasn’t yet been confirmed, but if fans show their excitement for this one, then it just might happen. Hallmark seems increasingly interested in making sequels to its movies, just look at the Vineyard movie series and the Wedding March series.

Here are more photos from the movie. 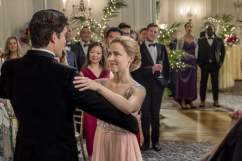 When Is the Next Hallmark Movie? Spring Fever Movie Schedule for March & April 2018