Jack Depp is the son of Actor Johnny Depp and Actress Vanessa Paradis.

Jack Depp is the 16 year old son of actor Johnny Depp and French musician and actress Vanessa Paradis, who were together from 1998 to 2012. OVer the course of their 14 year relationship, Depp and Paradis had two children, Lily-Rose Depp and Jack Depp. They have since separated, and in the time since that separation, Depp married and then divorced Amber Heard in a contentious and public dispute over allegations of physical abuse.

Currently, Johnny Depp is single, as is his former partner Paradis. Of their relationship, he said to The Philadelphia Inquirer, “Vanessa and I get along wonderfully. There’s no weirdness at all, no hostility. Life happens. We spent 14 great years together and have raised a couple of kids who we are both incredibly proud of. We see each other all the time, giggle and hang out, just like we always did. There are no hassles. Thankfully because she is a wonderful woman. I love her and she loves me. She’s a great woman and mom. I have nothing bad to say, ever.”

Jack Depp was recently involved in rumors about a “serious health condition,” but as of now there has been no confirmation of that by either of his parents’ representatives. Here’s what you need to know.

1.He Was Reportedly Dealing With ‘Serious Health Issues’ in June That Forced His Mother, to Miss Her Premiere

According to People, Paradis had to miss the premiere of her new film A Knife in the Heart because Jack Depp had a “serious health problem”. Though the extent or cause of the health problem was not revealed, the information was given by the movie’s director, Yann Gonzalez.

To Public, Gonzalez said, “Unfortunately, Vanessa Paradis was not able to join us tonight, she had to be absent because of her son’s serious health problems.”

Neither Paradis nor Depp’s reps have made any official comment on the matter, and Jack Depp does not seem to have any sort of public history of illness. According to People, Jack Depp’s father Johnny Depp was in Europe at the time, touring with his band The Hollywood Vampires. It’s unclear whether he was with Jack Depp at any point.

People reported on June 28 (about a day after reports first surfaced of Jack Depp’s supposed health issue) that Jack Depp was “looking a lot better” and was seen with a friend in Paris.

Jack Depp’s full name is John Christopher Depp III, according to Hollywood Life. Both his father, Johnny Depp, and his grandfather have the same full name, which is probably why he has the nickname of ‘Jack’.

Jack Depp was born in Paris on April 9, 2002, and he spends more time in Paris than in the United States. According to Hollywood Life, he reportedly didn’t like his stepmother Amber Heard while she was with his father, and this affected his visits. However, Johnny Depp disagreed with this perception in an interview with The Philadelphia Inquirer.

Of his now-estranged wife, Johnny Depp said of Heard’s relationship to his children, “It’s been great. They have become super-close, like pals. It’s amazing when you see that thing. You are so proud of your children.”

3. He’s Not Much for Social Media, and Doesn’t Want to Pursue Acting

Jack Depp is by far the most undercover member of his entire family. He doesn’t have a single social media account (though there are a few fan accounts for him on Instagram), and isn’t often photographed by paparazzi.

What’s more, unlike his sister, Lily-Rose Depp, Jack Depp seems to have no interest in pursuing a similar career as his parents, according to Johnny Depp in an interview with The Philadelphia Inquirer. Given that he’s only 16 years old, though, there’s certainly plenty of time for him to change his mind.

4.He Has One Sister, Lily-Rose Depp, Who Is an Actress and Model

Jack Depp’s sister, Lily-Rose Depp, is the opposite of Jack in terms of her gravitation towards acting and modeling, as well as her social media presence. As a model, the 19 year old has already found significant success, posing for the pages of Vogue and serving as an ambassador for Chanel.

She’s also acted in several films, such as The Dancer, which premiered at the Cannes Film Festival in 2016.

On social media, Lily-Rose Depp has a robust and dedicated troop of followers, with over 3.3 million followers on Instagram alone. Lily-Rose Depp posts a myriad of images on her Instagram account, from samples of her photoshoots to more candid pictures of her everyday life, though Jack Depp doesn’t make an appearance in her photographs very often.

5. He’s a ‘Simple Boy’, According to His Father, Johnny Depp

In an interview with The Philadelphia Inquirer, Johnny Depp described his son as a quiet, shy, kind boy. “My boy Jack has always been a very talented draftsman,” Depp said. “He draws really super- well. He also plays music very well. He’s got a good feel for that. Aside from school plays and things, he hasn’t shown any desire to become an actor. Whew!”

Depp continued, “My kids—I am more and more proud [of them]. Because having lived alongside me in their formative years—most parents’ jobs don’t require that kind of weirdness. The kids have turned out so well. They are good, smart kids. They are polite and caring.”

Depp added that though his daughter, Lily-Rose Depp is the one who’s actively involved in acting right now, both of his kids are talents. “I wish I could shy them away from it. But the kids are going to make the decisions. It’s what they want to do.” 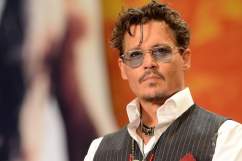