A Kate Spade suicide note was left behind after she apparently took her own life. The fashion designer was found hanged in her apartment in New York City on Tuesday, June 5. Law enforcement sources told TMZ that Spade’s housekeeper found her just before 10:30 a.m. EST. She had a scarf around her neck. The scarf had been affixed to a closet doorknob in her bedroom.

An official cause of death has not yet been released, as Spade’s body must undergo an autopsy, however, police are calling this a suicide based on the following criteria.

“There was a note left and the contents of the note, physical state of the apartment and statement of the witnesses lead us to believe it was an apparent suicide,” NYPD Chief of Detectives Dermot Shea told the media.

According to the New York Post, Spade’s husband, Andy Spade, was at home when her body was found. Their daughter was at school.

Spade wrote the note — or part of it — to her only daughter, 13-year-old Frances Beatrix Spade, whom she referred to as “Bea.”

As for a reason why Spade may have chosen to take her own life, a source told the New York Daily News that there were “problems at home,” but did not elaborate further. Despite these reported “problems at home,” it seemed as though Spade wanted to be sure that her teenage daughter knew that this tragedy was not her fault.

Spade left her fashion empire behind when her daughter was young, leaving the public eye for nearly 10 years. She spent that time at home with her only child — something that she said she wouldn’t trade for anything.

“‘A lot of people didn’t realize that 56% of it had been sold in 1999,’ she [explained], adding that she wouldn’t trade the time with her daughter ‘in a million years’ for her brand back,” Moneyish reported last June.

“We are all devastated by today’s tragedy. We loved Kate dearly and will miss her terribly. We would ask that our privacy be respected as we grieve during this very difficult time,” her family said in a statement shortly after her death was confirmed.

Over the past two years, Kate and Andy Spade had returned to the fashion world, releasing their new line, Frances Valentine, in 2016. The name was inspired by their daughter.

As for Kate Spade’s decision to return to work, Andy Spade supported the decision and thought it was good for the family — especially for Frances.

“I think it’s a good example for my daughter to see her mother work. Not that she didn’t before, but to see her work [as a designer],” he told Business of Fashion last year. 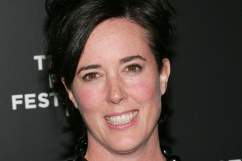