HBO He left his violent ways behind.

Lakota is a Sioux language that is spoken by approximately 2,000 Native Americans today, who live mostly in North and South Dakota, although there are also large populations of Lakota Indians ins  Montana and parts of Canada. (Note: According to Indians.org, there are about 70,000 registered Lakota Indians, and less than half still speak the ancestral language.) The language is also referred to as Lakhota, Teton, or Teton Sioux. It’s considered one of the three major varieties of the Sioux language. You might be interested to know that there is also an online Lakota language program to help you learn the language.

Lakota is a beautiful and expressive language. The word for children translates to “sacred beings.” God translates to “the energy in all living beings.” Here is a video of a man speaking Lakota. Shalis Morthanien, who uploaded the video, wrote: “In Lakȟóta, there are more or less two styles of speaking: colloquial and formal. In formal situations every word is pronounced fully and ‘accurately’, whereas in coloquial speech, different pronounciations and contractions occur frequently. In this recording, Leroy Curley uses a lot of colloquial speech and therefore it may be hard to follow. With help from others, I’ve a decent idea what he is saying and I have put it here in the description. It may be possible that there are still mistakes in the transcription and therefore I ask fluent Lakȟóta speakers to help me improve this…”

Morthanien translates what Curley is saying below as the following: “Great Mystery Grandfather. Most sacred Grandfather. A red day came pleasantly towards here and for that reason it is appreciated. When they [people] speak Lakota and say Lakota prayers then, without any trouble, we will see good human lives again. For those things I express having faith in you all. Also for the generation we live in all the elders are thanked. Grandfather I am nothing. It is my people that I love and who I will always consider as such, and for that reason each and every day I will take courage and that is why I work. Today, with a good heart that is appreciated. All my relations.”

Here are a few more “technical” points about the language. It has five oral vowels and three nasal vowels, and a neutral vowel is automatically inserted between certain pairs of consonants. In general, the word order is subject-object-verb, although that can be changed for emphasis.

The New York Times has a fascinating story from June 2000 about a woman seeking to preserve the Lakota language in all its richness and complexity. She said that at the Pine Ridge reservation, although many people still spoke Lakota, they were losing people who spoke it every day and could express the complex concepts found within the language. That’s why Delphine Red Shirt began a recording project to capture historical stories in the native language.

The complexity of the language transcends the spoken word and embodies their way of life. (Which is also why it was so fitting that this episode be spoken in Lakota. Nothing else would have worked as well.) Delphine Red Shirt told the New York Times that she found the answer to the meaning of life simply in her language’s word for God, a Creator who is “the energy in all living things.” The language’s word for June, “Tipsila nahca Wi” means “the month the wild turnips bloom.” 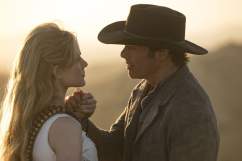 ‘Westworld’ Live Stream: How to Watch Season 2 Online for Free