Philo TV: MTV, VH1, Comedy Central and BET are included in Philo’s main bundle, which is the cheapest among all streaming services if you plan on keeping it long-term. The Logo network is also included with Philo. Not only that, but you can sign up for a free trial without having to enter any billing information. You’ll get two days for free right off the bat, then if you enter your billing information after that, you will get an additional five more days free. After signing up, you can watch the show live on your computer via the Philo website, or on your phone, tablet or streaming device via the Philo app.

Additionally, if you can’t watch live, Philo also allows you to DVR programs and watch them up to 30 days later. And even if you forget to DVR something, Philo also comes with a 72-hour rewind feature, which allows you to replay any show or event that has aired in the last 72 hours.

Sling TV: MTV, VH1 and BET are included in either the “Sling Orange” plus “Comedy Extra” bundle or the “Sling Blue” plus “Comedy Extra” bundle. You can sign up for a free 7-day trial of either, and you can then watch the show live on your computer via the Sling TV website, or on your phone, tablet or streaming device via the Sling TV app. If you can’t watch live, you can get 50 hours of cloud DVR storage as an additional add-on.

MTV MOVIE & TV AWARDS 2018 HOST: Tiffany Haddish is this year’s host and this is her first awards show hosting gig. This is the 27th edition of the awards show.

MTV MOVIE & TV AWARDS 2018 PERFORMERS: This year’s performers at the show are DJ Mustard with Nick Jonas and Chloe x Halle. Recently, Jonas was in the media for his reportedly new relationship with Priyanka Chopra. 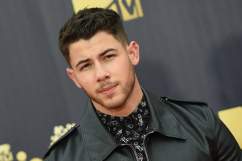