Tonight is the midseason finale of Fear the Walking Dead. The episode, titled “No One’s Gone,” is Episode 8 of Season 4. Then the show is going to take a break before returning for the second half of the season. But when will the show return?

As of the time of publication, we don’t have an exact date for the show’s return. But we can use a bit of deduction to guess. Except for Season 1, each season has had 15 or 16 episodes. Season 2 had 15, Season 3 had 16, and Season 4 will likely also have 16. A hiatus is typically built into the middle of each season so that the season can end right before the new season of The Walking Dead begins.

This season, for Season 4, Fear began on April 15, which is closer to its Season 2 schedule. Its midseason finale is airing on June 10, 2018.

We don’t yet have a new date for the Season 9 premiere of The Walking Dead. But we predicted that Season 9 would return sometime from mid-to-late October 2018.

With that in mind, we have a general window for when Fear might return if there are eight more episodes to air. If The Walking Dead were to return on October 28, for example, then the soonest that Fear could come back would be September 2. It could, however, come back later if they air any back-to-back episodes again this year, or if they decide to air Fear‘s finale the same night as The Walking Dead premiere. And of course, if The Walking Dead returns on October 21 instead, then we might see Fear return the last weekend in August, on August 26. No matter what, it appears that we are in for another very long hiatus, and the show won’t return until mid-to-late August at the earliest.

Be sure to tune in to Talking Dead after Fear airs tonight. Last year, the credits to Fear did not advertise when Fear was returning, but they did share the return date during Talking Dead. 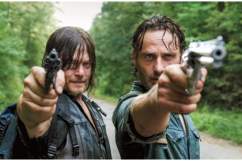 Will ‘The Walking Dead’ Be Canceled After Rick Leaves?

Read More
AMC, Fear the Walking Dead, TV
Here is what we know so far about how long that hiatus will be.