Steven Tyler and his longtime girlfriend, Aimee Ann Preston, are in Italy celebrating her birthday. The couple was spotted in Venice on Tuesday, taking in the sights and enjoying a romantic gondola ride.

“The Aerosmith front man, 70, channeled his inner Jack Sparrow in a kooky ensemble, as he treated his love to a romantic gondola ride for her special occasion. The rocker did not look far off from the famous pirate character in striped suit trousers, waistcoat and a white shirt, unbuttoned to the navel,” the Daily Mail reported, supplying some exclusive photos of the lovebirds.

Tyler also took to Twitter to share a sweet birthday message to his “lady love.” The romantic tweet included a photo of Tyler locking lips with Preston in the rain. It’s unknown when the photo was taken, but Tyler credited photographer Zack Whitford in the caption. You can see the photo below.

Preston, 31, met Tyler, 70, when she took a job as his assistant in 2012. Two years after she took the job, dating rumors surfaced.

“They’re not exactly dating but it’s not a strictly professional relationship either, it’s in the early stages. She has been working with him for a few years now,” a source told the Daily Mail in March 2014. “It’s early days between them, but they’re certainly having fun together. She is his personal assistant so she’s been following him everywhere,” the source added.

Tyler and Preston’s relationship has been a bit controversial because of their age difference; Preston is only older than one of Tyler’s daughters. She is 11 years younger than Tyler’s oldest daughter, actress Liv Tyler.

Since going public in 2016, Tyler and Preston haven’t been shy about their romance. Back in January, the two packed on the PDA at Tyler’s Inaugural Janie’s Fund Gala & GRAMMY Viewing Party.

“The couple appeared to be on a double date with Tyler’s daughter, Chelsea, and her husband of three years, actor and musician Jon Foster,” according to Entertainment Tonight.

As far as taking the next step goes, Tyler has yet to pop the question. However, there have been several rumors about an engagement. In December 2016, the couple sparked engagement rumors when Preston appeared to be wearing an engagement ring. There was another rumor that they were engaged in July 2017, when Preston was spotted wearing a “pearl and gold ring.” 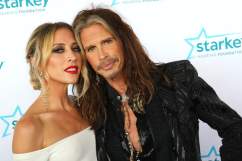