Meghan Markle and Prince Harry have arrived at Prince Louis’ christening. The Duchess of Sussex is wearing an olive green dress by Ralph Lauren. She is also in a large hat by Stephen Jones and a pair of suede Manolo Blahnik pumps, both accessories colored in the same green hue.

The dress featured a boatneck, which has become a sort of trend for Markle. She often wears dresses that show off her shoulders, and seems to enjoy playing with different necklines.

Markle walked into the chapel holding hands with her husband. The couple followed behind the Duke and Duchess of Cambridge, and the guest of honor, young Prince Louis, who was sound asleep in his mother’s arms. Prince William walked with Prince George and Princess Charlotte, all three greeting The Most Reverend and Right Honourable Justin Welby, the current Archbishop of Canterbury in the Church of England, before heading inside.

The Duchess of Cambridge opted for a cream-colored dress created by her favorite designer, Alexander McQueen.

“The Duchess has worn designs by Alexander McQueen for all of her children’s ceremonies and it’s a lovely tribute to her and Prince William’s wedding day in 2011,” the Mirror reports.

Duchess Kate looked lovely as she greeted Rev. Welby, the two sharing a few laughs before things got under way.

You can see the royals walking into the chapel in the video below.

Members of the Royal Family arrive at St James's Palace for the christening of Prince Louis. pic.twitter.com/3pDk4D898C

Since their wedding back in May, the Duke and Duchess of Sussex have made numerous appearances together. Most recently, they were in attendance for the Your Commonwealth Youth Challenge reception held at the Marlborough House in London on July 5. Duchess Meghan made a splash in a yellow sleeveless dress, wearing her dark hair in a low bun.

Markle’s schedule isn’t slowing down any, either. On Tuesday, July 10, she and Prince Harry are expected to arrive in Ireland. According to the Irish Times, Harry and Meghan will spend a quick two days in Dublin.

“Harry and Meghan are scheduled to visit Croke Park and the Book of Kells at Trinity College and will meet with President Michael D Higgins and Taoiseach Leo Varadkar during the trip from Tuesday, July 10th to Wednesday, July 11th. It will be their first official trip to Ireland since they became husband and wife in May. They will visit the Famine Memorial on Custom House Quay before moving on to EPIC, the Irish Emigration Museum, where they will learn of the millions of Irish people who have emigrated across the world,” reports the Irish Times.

The Duke and Duchess will be back in England on Wednesday, just in time for the World Cup semi-final match between England and Croatia. 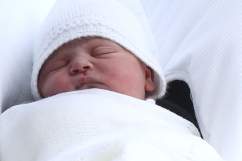