After months of waiting, fans can be pleased to hear that season 8 of Alaskan Bush People premieres this week. Plus, there are several specials that are airing, leading up to the new episodes.

“ALASKAN BUSH PEOPLE” SEASON 8 EPISODE 1 SYNOPSIS: The title of the premiere is “Back to the Bush” and the Xfinity synopsis of the episode reads, “The Wolfpack arrives on their new property in the most remote frontier of the lower 48, but the long winter in the region wreaks havoc on their first attempts to tame the mountain.”

“ALASKAN BUSH PEOPLE” 2018 SCHEDULE DETAILS & ADDITIONAL SHOW INFO: Several specials and update episodes are airing prior to the premiere. Leading up to the season 8 premiere, on Wednesday, August 15, 2018, a three-hour special, titled “A Family Unlike Any Other”, airs from 7:59 – 11:01 p.m. ET/PT and 6:59 – 10:01 p.m. CT. The Xfinity synopsis of the episode reads, “Brown family members spend their days making improvements to their homestead and hunting for food in the forest.” Another special, titled “Unbreakable Will,” airs from 8 – 9 p.m. ET/PT and 7 – 8 p.m. CT. The synopsis of this special states, “The Browns prepare for a new adventure in the remote wilderness of the Pacific Northwest, following unprecedented obstacles over the past year.” Rerun episodes of the show will also be running on the Discovery channel throughout the week, leading up to the premiere. And, some of the season 8 episodes from Alaskan Bush People have become available for purchase on Amazon.

“ALASKAN BUSH PEOPLE” SEASON 8 LIVE STREAM: If you don’t have cable or can’t get to a TV, you can watch the Discovery Channel via Philo TV, a cable-free, live-TV streaming service.

Not only is Philo the cheapest option among all the streaming services at just $16 per month, but you can sign up for a free trial without having to enter any billing information. You’ll get two days for free right off the bat, then if you enter your billing information after that, you will get five more days free. After signing up, you can watch the show live on your computer via the Philo website, or on your phone, tablet or streaming device via the Philo app.

Additionally, if you can’t watch live, Philo also allows you to DVR programs and watch them later. And even if you forget to DVR the show, it also comes with a 72-hour rewind feature, which allows you to replay any show or event that has aired in the last 72 hours.

Going into the season, matriarch Ami Brown is in remission after a devastating battle with stage 4 lung cancer. In addition, the family rebuilds their lives in Washington instead of Alaska. In the season 8 trailer, Dad Billy is heard saying, “It’s a miracle is what it is. We’ve gone through a lot of adversity. It was like everything was closing in on us, darkness all around and it was over. Then, Washington came into view.” 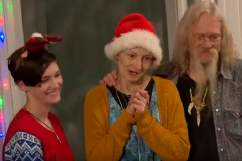