Season 5 of Bachelor in Paradise airs two nights per week, on Monday and Tuesday nights, at 8 p.m. ET/PT and 7 p.m. CT, on the ABC channel. Tonight airs episode 5 of the 2018 season and new cast members continue to arrive, as drama heats up with the current paradise residents. But, before we get into all the details on what happens on tonight’s episode, as well as other big spoilers for future episodes, this is your MAJOR SPOILER WARNING. Do NOT continue reading if you do not want to know about tonight’s episode or any upcoming episodes.

The official ABC synopsis for episode 6 reads, “Jam-packed with romance, betrayal and confrontation amongst the brawny bachelors and bikini-clad bachelorettes, the only thing for certain is the drama that lies ahead. With one fickle female bouncing back and forth between the well-groomed male model and the well-accented French Canadian, someone’s heart is bound to be broken.”

It continues, “Speaking of love triangles, there is certainly no shortage in Paradise this season. One new arrival refuses to take no for an answer when he is turned down for a date by a girl who had been waiting for him but found herself falling for his friend before he could get there. She eventually agrees to give him a chance and when their mystical date turns into a hot make-out session, will the betrayed buddy go away quietly or step up his game to win his lady back? When one bachelor leaves Paradise early, the distraught woman he leaves behind is desperate to find another man who would want all the love that she has to offer. Enter a newcomer who chooses her for a date that will give her new hope of finding the connection she has been looking for.”

This week, the women have the power to give out roses. Tune in to the ABC network or find instructions on how to watch Bachelor in Paradise season 5 online here to watch the show. Now, read on below for tonight’s show spoilers.

Newcomer Leo Dottavio appeared last week on the show and unexpectedly swept Kendall Long off her feet, much to the dismay of Joe the Grocer, who had been courting her. Leo and Kendall ended up on a romantic photo shoot date together and soon, Kendall was truly invested in the potential of a relationship. Meanwhile, Joe was determined to keep the woman he’d grown to have feelings for. Kendall Long ends up in tears, confused about what to do about her new crush versus her previous crush.

Meanwhile, Leo was already playing the field with other women behind Kendall’s back.

Tonight, it looks like Leo’s time is almost up in paradise, as ABC reported, “No one knows who will get the rose of one desired darling torn between the likeable grocer from Chicago who makes her laugh and the beautiful-haired man she can more easily see herself in a relationship with beyond Paradise, that is, until a loose-lipped friend lets it slip that one of her suitors kissed another luscious blonde. Threatened with the loss of his lady, the guilty party reaches a breaking point that leaves everyone shocked.” In a preview of tonight’s show, it appears that Leo’s temper gets the better of him and Joe confronts him.

According to ABC, it appears that Leo does not leave paradise tonight. However, his exit may end up being on tomorrow night’s episode. Fans will just have to wait and see.

Benoit Beauséjour-Savard met Clare Crawley on The Bachelor Winter Games and got engaged to her, but they ended up breaking up. Last week, Benoit arrived in paradise and ended up right in the middle of Jenna Cooper’s romance with Jordan Kimball. Tonight, Jenna continues to entertain both men, but she does not end up with Benoit. According to Reality Steve, Jenna reportedly gets engaged to Kimball. 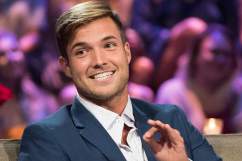 Read More
Bachelor In Paradise, Reality TV, TV
Read on for spoilers on episode 6 of season 5 for Bachelor in Paradise, as the 2018 season heats up more each week.