Getty Betty White attends Time's 100 most influential people in the world gala at Frederick P. Rose Hall, Jazz at Lincoln Center on May 4, 2010.

Betty White is an American treasure, and many wonder about her family. Did Betty White have children? How many kids did she have? Well, White never had any children of her own. She was married three times, and didn’t have kids with any of her husbands. Her third husband, Allen Ludden, however, was a widower with three kids when he met White. Ludden was previously married to first wife, Margaret McGloin, who died of cancer, according to Closer Weekly. So, when White and Ludden married, she became the step-mother to them and has said that they are still a part of her life today, long after Ludden’s death.

So, why didn’t White want to have children herself? In a 2011 interview with CBS Sunday Morning, White confirmed that she did not regret her decision to never have kids. She explained, “No, I’ve never regretted it. I’m so compulsive about stuff. I know that if I had ever gotten pregnant, of course, that would’ve been my whole focus. But I didn’t choose to have children because I’m focused on my career and I don’t think as compulsive as I am that I could manage both.”

Clearly, White’s focus was on her career, as she never stopped working, well into her 90’s. After turning 96 years old, FOX News reported that White said she had no plans on retiring any time soon. Steven J. Boettcher, who co-directed the PBS film Betty White: First Lady of Television, said to Closer Weekly that, “She told me, ‘I’m going to be in the saddle forever.’ She loves working; she loves the challenge. She’s someone that we’re all better off for that she’s lived this long.” 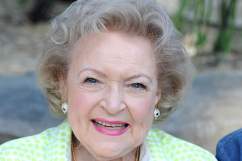 White’s response, according to FOX News, was that, “I got an award for everything: inhaling, exhaling. I’ve been so spoiled rotten. I’m the luckiest old broad on two feet. Truly! I’ve always been working at something … I just love to work, so I’ll keep working until they stop asking.” In an interview with Parade, White confirmed that she’d always wanted to be a movie star and she certainly got her wish.

When it comes to being a proud step-mother, actress Sandra Bullock once revealed that White’s take on her step-children gave her strength with her own family. Bullock revealed to People that, “Betty said, ‘You know what? I never had children biologically. I married someone who had three children. And how blessed I was to have those three stepchildren.’”

Allen Ludden’s three children are named David, Martha and Sarah Ludden. Over the years, there were rumors that Martha and step-mom Betty White had a few issues. A “longtime family friend” previously told The National Enquirer, in 2010, that Martha originally resented White for marrying her father just two years after her mom died of cancer. Pop Crunch reported the insider saying, “Martha was young and she deeply opposed the marriage. She was very angry at her father and made it clear she did not like Betty. Her relationship with her was strained from the start … Allen used to argue with Martha constantly over her … anger towards Betty. Her tumultuous relationship with her father caused him a lot of grief.”

The insider continued, saying, “I think Betty blamed Martha for making Allen’s last years nothing but misery and heartache,” says the friend. “She [Martha] now lives alone, and to this day, 30 years later, Betty still won’t have anything to do with her. She doesn’t even acknowledge her existence and has refused every attempt by Martha to make amends. Even when Martha’s sister tried to intercede, Betty refused … All she wants to do is apologize to Betty for the pain she caused, but that door shut a long time ago. And Betty won’t budge.”

Martha Ludden reportedly went on to attain a law degree in 1990 and works with people who have disabilities, according to Pop Crunch. When it comes to her relationship with White, at the time of The National Enquirer report, Martha admitted, “The last time I spoke with my stepmother, Betty White, was 30 years ago … I don’t want to talk about it.” This was years ago, so perhaps Martha and her step-mom have mended their relationship, considering White appears to proud of her step-children when she speaks of them.

When White first married third husband Ludden, she moved across the country to be with him, along with his three children and the family’s two poodles, to Chappaqua, New York, as reported by Closer Weekly. The couple reportedly had to work through issues of adjusting to their new life together, and with the kids, and White admitted that, “It finally penetrated my thick skull that [Allen and I] were a unit. From that day forward, any problem we had … came from the outside. Allen had taught me to stop running.”