Meghan Markle and Prince Harry have been married for more than two months, and royal watchers have been hoping to hear some baby news. Although there have been several pregnancy rumors floating around the internet, Markle is not with child just yet — but a baby may very well be on the horizon.

The Duke and Duchess of Sussex have been open about their desires to start a family. In fact, the two discussed the idea during their very first joint interview, after their engagement was announced.

“We’ll start a family in the near future,” he told BBC journalist Mishal Hussain at the time. Now, according to Hello! Magazine, there seems to be at least one sign that the royal couple is ready to take that next step and become parents: Harry is selling his car.

“Prince Harry has fueled rumors he is hoping to start a family with his wife Meghan Markle after putting his car up for sale. The Duke of Sussex is thought to have owned his luxury Audi RS6 Avant for just over a year, but is he ready to swap the slick vehicle for a bigger family car? … The Audi is expected to fetch a cool £71,900. It was acquired by Derbyshire-based car dealership Overton Prestige, who has listed it on Auto Trader. The Audi RS6 4.0 Avant Tiptronic Quattro 5dr is the sportiest in its range and features extras that could have been handpicked by Harry himself, including a panoramic sunroof and heated front and rear seats,” the mag reports.

No word yet on why, exactly, Harry is selling his car, or if he and Markle are looking to add a more family-friendly vehicle to their garage. However, it does seem likely that the couple will try to conceive over the next year or so, especially because Markle is already 36 (she turns 37 this weekend).

As Cosmopolitan points out, the Duke and Duchess of Sussex have “a pretty extensive tour” of Australia, Fiji, the Kingdom of Tonga, and New Zealand in October. The magazine goes on to say that it would be unlikely for Markle to get pregnant in the coming months and to spend her first trimester traveling. It seems more likely that the former Suits actress and her new hubby would try to conceive around the holidays. 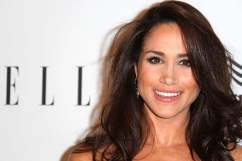