Mike Shouhed has a crush this season on Shahs of Sunset. When Nema Vand becomes a new cast member, he introduces his sister, Dr. Mona Vand, to viewers. But, Mona has certainly caught the eye of Mike. While Mona and Mike carry on a flirtation, Mona’s brother develops a little crush on fellow Shahs cast member Golnesa Gharachedaghi, aka “GG”. Even with GG as a distraction Nema told Bravo that Mona and Mike’s connection makes him uncomfortable.

Mona is known as somewhat of a “modern pharmacist”, specializing in beauty and health, with an emphasis on plant-based wellness. But, being on a reality show, she is certain to catch heat from haters. Recently, a user called “jackie_h876” commented on a photo of Mona from her brother’s Instagram account and wrote, “You should call @drmonavand out on her bullshit pathetic attempts to pass plastic surgery/lipo for results of her “health tips” everyone knows shes a fraud. What a joke. People literally laugh at how pathetic she is.” Nema was quick to come to his sister’s defense and responded with, “SPILL IT GURL. Don’t worry about my sister and her doctorate degree, successful career, wellness brand and followers. Please just focus on your life. Jealousy is a sickness. BE WELL.”

When it comes to her own description of what she does, Mona’s professional website bio reads, “As a pharmacist, I understand wellness at a chemical level. Most pharmacists believe in filling prescriptions. I believe in a healthy lifestyle. Medication is only part of the equation for maximum health. Wellness stems from diet, exercise, and mindset.” She then continues, saying, “I teach my health methods to over 100k people on a daily basis and regularly appear on the media. I’ve been featured on NBC, The Telegraph, The Doctors, and more. You’ll never see me promote something I don’t believe in. I want the best for people and have a genuine passion for wellness and beauty. I consider myself lucky to have a fan base who believes in health as much as I do. Let’s make the world a healthier place, one smart decision at a time!” With her business practices, Mona also keeps up with her wellness blog.

What should tonight’s Insta Live be on?? Pick below – I’ll choose the most requested one ? ⠀ 1 ➡️ FOOD / vegan & vegan protein 2 ➡️SKIN / morning & night routine 3 ➡️WELLNESS / superfood powders & supplements ⠀ Pick one AND leave your question below. I will answer the first 50, and as many as I can get to after that (in order) ? ⠀ TIME: 6 pm PST ⠀ #instagramlive #skincareblogger #veganblogger #wellnessblogger #drmonavand

Mona and her brother, Nema, have one other sister, a sibling named Sarahbeth, according to Romper.

So, what’s going on with Mona and Mike today? Are they two casually dating? Are they boyfriend and girlfriend? What’s the deal?

Romper reported that Mike stated in April 2018 that he was dating a “bombshell” and he said, “She’s super smart, takes care of herself, a boss … kinda reminds me of my mom.” Could this be Mona?

Over the past few seasons of Shahs of Sunset, fans have seen Mike get married to ex-wife Jessica Parido, with whom he was reportedly with for close to a decade. The marriage fell apart within month, after incidents of infidelity, on Mike’s part, were revealed. After his divorce, Mike admitted to People that, “I feel at peace. It was a very difficult time of my life. Anyone who has gone through a divorce knows it’s never fun. It’s emotionally and mentally draining, and there was an overwhelming feeling of guilt that I had because I was responsible, partly, for breaking up a marriage.”

So, are Mike and Mona still together today? Fans will just have to wait and see, but they were photographed together in the below Instagram photo, in late June 2018, while with the rest of the Shahs of Sunset cast.

reality TV made us do it!! Who’s ready for season 7? #Shahs 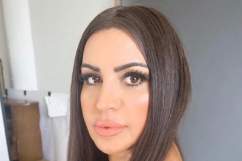