Tonight, nine men fought to win over the heart of Amber Green.

The 29-year-old goes by the handle ‘yougottabekittenme’ on Instagram, and based on her pics, she appears to be living the life in Austin, Texas. If the blonde beauty isn’t snapping photos of her dog, she’s posing with friends and family. One thing Amber wants to make sure her bachelors know? She has two children.

She has been promoting her appearance on the show on social media.

Check out some pictures of Amber below:

Somebody remind me to take the hair tie off my wrist if/when I get married. Kthnxbye #hairtie or #elastic #unicorn #solodolo

During the interview section of the episode, Amber revealed a bit about herself. Audiences learned more about her family, and she also divulged that she was in a seven year relationship.

Who did she choose in the end? When all was said and done, Amber chose to accept Johnny Jez’s proposal. Jez is a personal trainer the founder and CEO of YESH Apparel, surf inspired apparel for men and women. He currently lives in Newport Beach, California, which is where he was raised.

The Proposal debuted on ABC June 18, and is hosted by former NFL quarterback Jesse Palmer. During each hour-long episode, ten contestants set out to win over the heart of one mystery man or woman.

Four rounds make up each episode. The first is based solely off of first impressions. The second involves the contestants strutting their stuff in a swimsuit competition. For the third round, contestants speak to the mystery man or woman and tell them why they’re the best choice.

Next, the hopefuls get to meet the parents of the bachelor or bachelorette. By the end of the night, a proposal is promised. 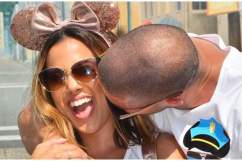 ABC’s ‘The Proposal’: Which Couples Are Still Dating?

is
Read More
ABC
Who is tonight's mystery woman? Get the details here.