Tonight on Better Call Saul Season 4 Episode 3, we had not one but two cameos from Breaking Bad. One (Gale) was more obvious to fans. But another cameo took place that might have looked familiar to you, but didn’t ring an immediate bell.

The second cameo was the thief that Jimmy hired to steal a collectible (the Hummel) from the printing company. This was the thief who called Jimmy during tonight’s episode and needed Jimmy to rescue him because the owner of the company was camped out and not planning to leave any time soon.

He’s actually Ira from Breaking Bad. Ira is the owner of Vamonos Pest.

The Breaking Bad wiki has a great writeup about Vamonos Pest here. It’s a fumigation company in Albuquerque, New Mexico, that was originally owned by Ira. Ira eventually sold the company to Mike, Walter White, and Jesse. They used it as a front for their meth manufacturing.

Originally, the company was legitimately a pest control business, but it was also used to burglarize houses that were fumigated. Saul Goodman (aka Jimmy) was lawyer for quite a few people connected to Vamonos. So here we see Jimmy making  yet another connection to a future client.

Ira sold Vamonos in 2009 to Mike, Walter White, and Jesse. Walt was eventually the sole owner of the business.

Ira only appeared on Breaking Bad in Season 5A, but fans still were quick to recognize him on Better Call Saul.

By the way, if you missed the “sliced pizza” Easter egg from Ira’s scene, this might help jog your memory:

Was wondering why the guy had to ask for sliced pizza and then I remembered…#BetterCallSaul pic.twitter.com/drDvb9eBXY 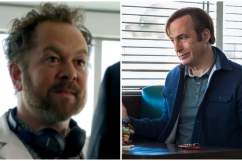 Was Gale from ‘Better Call Saul’ on ‘Breaking Bad’?