We are less than 24 hours away from the release of Travis Scott’s Astroworld, and fans have responded by turning the rapper and his album artwork into memes.

It started when Scott tweeted out the artwork for both the standard and deluxe versions of the album on Instagram. Given the abstract nature of the artwork, which includes semi-nude models standing in front of an amusement park in various positions.

An image of Scott’s head, blown up and coated in gold, is used at the entrance. Check out the original versions below.

The unique image of Scott’s head was quickly snatched up by Twitter users, who photoshopped it into unlikely locations. Some of the most notable locations include Mount Rushmore, where the rapper joins the likes of George Washington and Abraham Lincoln, and Easter Island, where he fits right in with the rest of the mysterious heads. 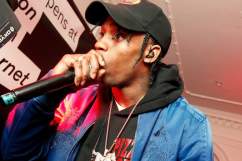 What Time Will Travis Scott’s ‘Astroworld’ Be Released?

Shout out to our founding fathers, thank you for all you did for our country!?☄️ @trvisXX pic.twitter.com/dIh8VhM0pl

ASTROWORLD IS TAKING OVER ?? @travisscott #astroworld

NASA has spotted a Travis Scott head on the Moon… pic.twitter.com/Feen8mxJpw

I'm high af so this looks 10x cooler and y'all should go like this and go on his page and like it ????

Elsewhere users, flipped the script, and photoshopped the head of other celebrities on Scott. One such example includes the character Michael Scott, who Steve Carell played on The Office, and includes a tracklist with titles like “That’s What She Said” and “World’s Best Boss” that pertain to the show’s running gags.

Another example shows the Astroworld album cover but with the face of actor and musician Michael Cera.

Album of the year!?? #ASTROWORLD pic.twitter.com/syCeJrSm0x

Scott’s rollout for the album likely inspired the meme craze. Before releasing the artwork, the rapper placed giant inflatable gold heads of himself at various landmarks across the United States.

Last week, the first head popped up on top of the roof of Amoeba Records in Los Angeles.

A second inflatable head was spotted outside of Minute Maid Park in Houston, which is also the rapper’s hometown. Other heads appeared outside the Magic City strip club in Atlanta and the Hard Rock Cafe in New York City.

How to Stream & Listen to Travis Scott’s ‘Astroworld’