Travis Scott will release his long-awaited album Astroworld on Friday. The album has been teased since 2016, and was prefaced by the promotional single “Watch” featuring Lil Uzi Vert and Scott’s mentor, Kanye West.

How to stream & listen to Travis Scott’s new album

Astroworld, Scott’s third studio album following 2015’s Rodeo and 2016’s Birds In the Trap Sing McKnight, will be made available on a number of different streaming platforms at 9 p.m. PST on Thursday or midnight EST on Friday.

We’ve listed the different platforms that the album will be released on, and the ways in which you can listen to them below.

The album is being streamed live on Scott’s YouTube channel in conjunction with its release on the aforementioned platforms.

According to HotNewHipHop, Scott announced that he would be hosting a streaming party shortly after performing at Lollapalooza. Check it out above.

You will be able to stream Scott’s album on iTunes and Apple Music. If you have an Apple Music account, you can go into the app on your phone or tablet and set the notifications to alert you when the album is out. Click here to learn how.

If you have an Apple Music account, you will also be able to stream the album on Scott’s .wav Radio show on Beats 1. According to Scott collaborator Chase B, Astroworld will be streamed in its entirety on .wav Radio at some point on Friday. A specific time has not yet been set.

Scott premiered Birds In The Trap Sing McKnight on a 2016 episode of .wav Radio. It has since been on a hiatus. In a recent interview with Zane Lowe, the rapper said that the radio show was “definitely coming back.” You can stream .wav Radio here, and if you don’t have an Apple Music account, you can get one by following the instructions above.

In addition to the livestream, Scott and Chase B will be releasing songs that didn’t make the final Astroworld tracklist on .wav Radio.

Based on the standard release schedule for Spotify, the Astroworld album will also be available to stream. If you don’t have a Spotify account, you can sign up for one here and pay only $0.99 for the first three months.

Scott’s album will also be available to listen to on Tidal. The streaming service offers a free 30-day trial with Tidal Premium, which provides  access to music videos and curated playlists.

Astroworld was announced well before Scott released Birds In the Trap Sing McKnight, and the rapper spoke about what the title, and the amusement park that inspired it, means to him.

“The next record is called Astroworld. It might be the best music that I made,” he told Hypebeast. “I have two records on the album that are like, man, they are the best. They tore down ‘Astroworld’ to build more apartment space. That’s what it’s going to sound like, like taking an amusement park away from kids. We want it back. We want the building back. That’s why I’m doing it. It took the fun out of the city.” 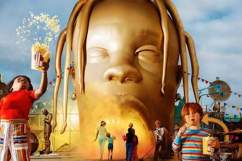 Why Did Travis Scott Name His Album ‘Astroworld’? 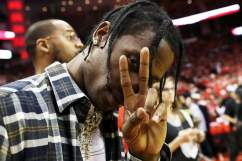 Is This the Tracklist for Travis Scott’s New Album? Not Likely