America’s Got Talent 2018 kicks off its live semi finals shows tonight, on September 4, 2018. The semi finals begin with 11 acts performing live for America’s votes and the judges will give their opinions as each act performs (as always). Find out who is performing tonight, how to vote online, how to watch the semi finals online. Plus, read on for the schedule for the rest of the season below.

AGT 2018 TV CHANNEL TO WATCH: The show airs, as always, on the NBC network. Check with your local TV provider (ie. FIOS, Optimum, Time Warner) to find out what channel NBC airs on in your area. You can also use the NBC channel finder to look for your local stations, which you can find here.

“AMERICA’S GOT TALENT” 2018 VOTING: The live semi finals begin on September 4, 2018. To vote for your favorite acts and winners on the show, there are four voting methods available to viewers. Find them, along with voting instructions and the designated phone numbers for part 1 of the semi finals here.

HOW TO WATCH AGT SEASON 13 ONLINE: If you don’t have cable or can’t get to a TV, you can watch the AGT semi finals live on your computer, phone or streaming device by signing up for one of the following cable-free, live-TV streaming services:

In addition to their extensive Netflix-like streaming library, Hulu now also offers a bundle of live TV channels, including NBC (live in most markets). You can sign up for “Hulu with Live TV” right here, and you can then watch a live stream of NBC on your computer via the Hulu website, or on your phone, tablet or streaming device via the Hulu app. If you can’t watch AGT live, “Hulu with Live TV” also comes with both its extensive on-demand library (which has many shows available after they air) and 50 hours of Cloud DVR storage (with the ability to upgrade to “Enhanced Cloud DVR,” which gives you 200 hours of DVR space and the ability to fast forward through commercials). 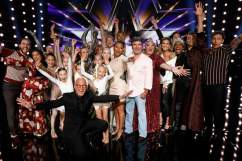 AGT 2018 Voting: How to Vote for America’s Got Talent Semifinals – Week 1