The fued between Nicki Minaj and Cardi B continues to heat up. After their infamous encounter at Fashion Week on Saturday, Minaj took to Queen Radio to air out her grievances and to throw additional shade at her female rival.

“The other night I was part of something so mortifying and so humiliating to go through in front of a bunch upper echelon… people who have their life together. The way they passed by looking at this disgusting commotion,” she said. “I was mortified. I was in a Gaultier gown—off the motherf*cking runway—and I could not believe how humiliated it all felt because we… made ourselves look [ridiculous].”

Minaj States That Cardi B Is Acting ‘F*cking Dumb’

Minaj goes on to address Cardi’s accusations that she insulted Cardi’s child Kulture. The “Bodak Yellow” rapper hopped on Instagram shortly after the Fashion Week altercation on Saturday to accuse Minaj of slighting her family.

Minaj denies ever commenting on Cardi’s child, but goes on to insult her intelligence. “I just want people to know that Onika Tanya Maraj has never, will never… speak ill on anyone’s child,” she said. “I am not a clown. That’s clown sh*t. The other thing is to tell the world something just because you look f*cking dumb. You knew that when that footage came out, you was about to look f*cking dumb, so your publicist—also looking f*cking dumb…—they hurried up and put out a statement. I’m such a ill-ass b*tch I didn’t even feel the need to defend myself that night.”

Minaj, who has dissed a number of celebrities in the past few weeks, including Travis Scott, Kylie Jenner, Drake and ex-boyfriend Meek Mill, also said that Cardi should be focusing less on the feud and more on her own personal life.

“The world gave you a blessing, of a beautiful bundle of joy, and the only thing on your mind after you gave birth was to attack people and to stop their bagsm” she wrote. “And you wanna let your publicist write something about stopping bags? Do you know what it is to sit in your room for hours and days at a time writing raps? You came into my f*cking culture! I never had a DJ to play my f*cking songs.”

Minaj closed out her rant by saying that Cardi needs psychiatric help. “Get this woman some f*cking help. This woman is at the best stage of her career and she’s throwing bottles and shoes?,” she said. “You n****s don’t care until somebody’s f*cking dead…. This sh*t ain’t f*cking funny. You put your hands on certain people, you gonna die. Period.”

Cardi B has yet to respond to Minaj’s onslaught of comments, but there have been rumors that diss tracks for each respective side are in the works. On Sunday, Minaj took to Instagram to post a video of herself listening to the song “Hard White” from her new album Queen.

The song is rumored to be a Cardi B diss, with references to her past profession as a stripper. “Uh, I ain’t never played a hoe position,” Minaj raps. “I ain’t ever have to strip to get the pole position/Hoes is dissin’? OK, these hoes is wishin’.” 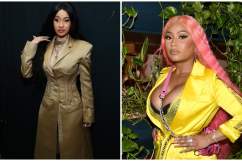