Brockhampton will release their fourth studio album Iridescence on Friday. The release comes on the heels of their Saturation trilogy and the Puppy album, which was shelved after member Ameer Vann left the group.

How to Stream & Listen to Brockhampton’s New Album

Iridescence will be made available on a number of different streaming platforms at 9 p.m. PST on Thursday or midnight EST on Friday. We’ve listed the different platforms that the album will be released on, and the ways in which you can listen to them below.

You will be able to stream Brockhampton’s new album on iTunes and Apple Music. If you have an Apple Music account, you can go into the app on your phone or tablet and set the notifications to alert you when the album is out. Click here to learn how.

Based on the standard release schedule for Spotify, the Iridescence album will also be available to stream. If you don’t have a Spotify account, you can sign up for one here and pay only $0.99 for the first three months.

Brockhampton’s album will also be available to listen to on Tidal. The streaming service offers a free 30-day trial with Tidal Premium, which provides  access to music videos and curated playlists.

Iridescence has gone through more drama than most studio releases. The group originally announced that their fourth album would be called Team Effort, but they later retracted the statement and said that it would be called Puppy instead.

The group released several teasers during the Puppy sessions, with leaked tracks including “Ready for War” and “Let’s Get Married.” Check them out, along with several others, by clicking the link below. 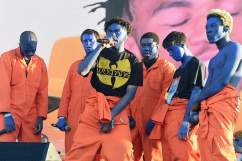 LISTEN: Every Snippet from Brockhampton’s ‘Iridescence’

“In response to the claims of emotional and sexual abuse,” he wrote. “Although my behavior has been selfish, childish, and unkind, I have never criminally harmed anyone or disrespected their boundaries. I have never had relations with a minor or violated anybody’s consent.”

Brockhampton announced that Vann would be leaving the group on May 27. “We want to sincerely apologize to the victims affected by Ameer’s actions,” they wrote in an official statement. “We were lied to, and we’re sorry for not speaking up sooner.” Puppy was shelved soon afterwards, and they announced that the new album would be called Iridescence.

The group released the official artwork and tracklist for the album on September 13. Check it out below. 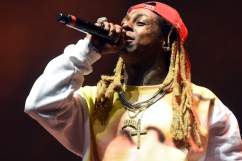