Theresa Caputo, of Long Island Medium, and her husband, Larry, are going through a divorce. They are living on opposite coasts, with Larry residing in California, and now he is dating a new woman. According to TMZ, Larry’s girlfriend is named Connie Talley Stauddy and the two were recently spotted out together shopping in Alabama.

Connie is from Decatur, Alabama and she is 53 years old. According to TMZ, the couple met online when Connie reached out, in an attempt to get a reading from Larry’s wife, Theresa. Extra TV stated that the two reportedly stayed in touch and were talking long distance for a few months before dating. And now, Connie is definitely in the picture. In fact, Connie, like Larry, is also said to be going through a divorce from husband Robert Scott Stauddy, so that’s something they have in common.

When it comes to Connie’s family, TMZ has reported that she is actually a grandmother. According to Connie’s Twitter account, her motto is that, “Life is not about waiting for the storm to pass. It’s about learning to dance in the rain!” She also has posts from 2014, retweeting promotional tweets for Long Island Medium, so she was clearly a big fan.

A couple weeks before the identity of Larry’s girlfriend was revealed, Larry told TMZ, “I have moved on. I’m fortunate enough to say that I have met someone special. But I’ll just leave it for that now.” According to Us Weekly, Larry said both he and Theresa have moved on, but there have been no reports of Theresa dating anyone.

Theresa and Larry Caputo called it quits in late 2017, but they officially filed for divorce in April 2018. The Caputos announced their separation in a joint statement, in December 2017, saying that, “We will always love each other and our two wonderful children. We are united in supporting each other and our family.” After the statement was released, Theresa reached out to her fans via Twitter, thanking them for their support. Theresa tweeted, “I’m overwhelmed by the love and support for me and my family while we’re going through this difficult time. One thing will never change and that is that we will always love and support each other, and be the best parents we can be to our children. Love you guys.”

As for how Theresa views her connection to Larry today, she told Good Housekeeping that, “[We’re] working and finding our place. We’ve been together for a very long time. And people change. We all change. None of us are the same we were 10 years ago, five years ago, regardless of our work or what we’re doing with our lives. We change, as people.”

The former couple got married in 1989, according to Page Six, and they have two children together – a son named Larry Jr. and a daughter named Victoria. Both kids have appeared on Theresa’s show Long Island Medium, as has her husband, Larry. Partly because of the divorce, Theresa’s husband and kids have appeared on the show less and less. 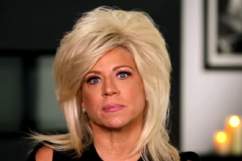