Lil Baby and Gunna will release their collaborative mixtape Drip Harder on Friday. The mixtape was announced earlier this year, and was preceded by the single “Drip Too Hard.” It is the latest installment in Gunna’s Drip Hard series, and will be made available at 9 p.m. Pacific or midnight Eastern depending on your time zone.

How to Stream & Listen to Lil Baby & Gunna’s Mixtape

Drip Harder will be made available on a number of streaming platforms at the aforementioned times. We’ve listed the different platforms that the album will be released on, and the ways in which you can listen to them below.

You will be able to stream Baby and Gunna’s mixtape on iTunes and Apple Music. If you have an Apple Music account, you can go into the app on your phone or tablet and set the notifications to alert you when the album is out. Click here to learn how.

Based on the standard release schedule for Spotify, Drip Harder will also be available to stream. If you don’t have a Spotify account, you can sign up for one here and pay only $0.99 for the first three months.

Baby and Gunna’s mixtape will also be available to listen to on Tidal. The streaming service offers a free 30-day trial with Tidal Premium, which provides  access to music videos and curated playlists.

Lil Baby and Gunna have been teasing this collaboration since May. They released the first promotional single for the album, “Drip Too Hard,” on September 12. The track sees both rappers talking about life on the road. “Doing all these shows, I’ve been on the road,” Baby raps. “Don’t care where I go, long as I get paid.”

Both rappers have seen their popularity skyrocket in the past year. Lil Baby, born Dominique Jones, scored a massive hit with the Drake-assisted “Yes Indeed,” which peaked at number six on the Billboard Hot 100. The album that accompanied it, Harder Than Ever, also surpassed expectations, debuting at number three on the Billboard 200. Drake is rumored to be a feature on a Drip Harder track tentatively known as “Doubles.” Check out a snippet of it below.

Thugger, an avid supporter of both artists, is expected to be on Drip Harder, though the official tracklist for the mixtape has yet to be released. Check out the video for “Oh Okay” below. 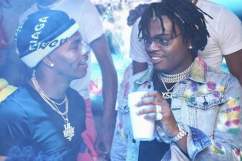 What Time Will Lil Baby & Gunna’s ‘Drip Harder’ Be Released?